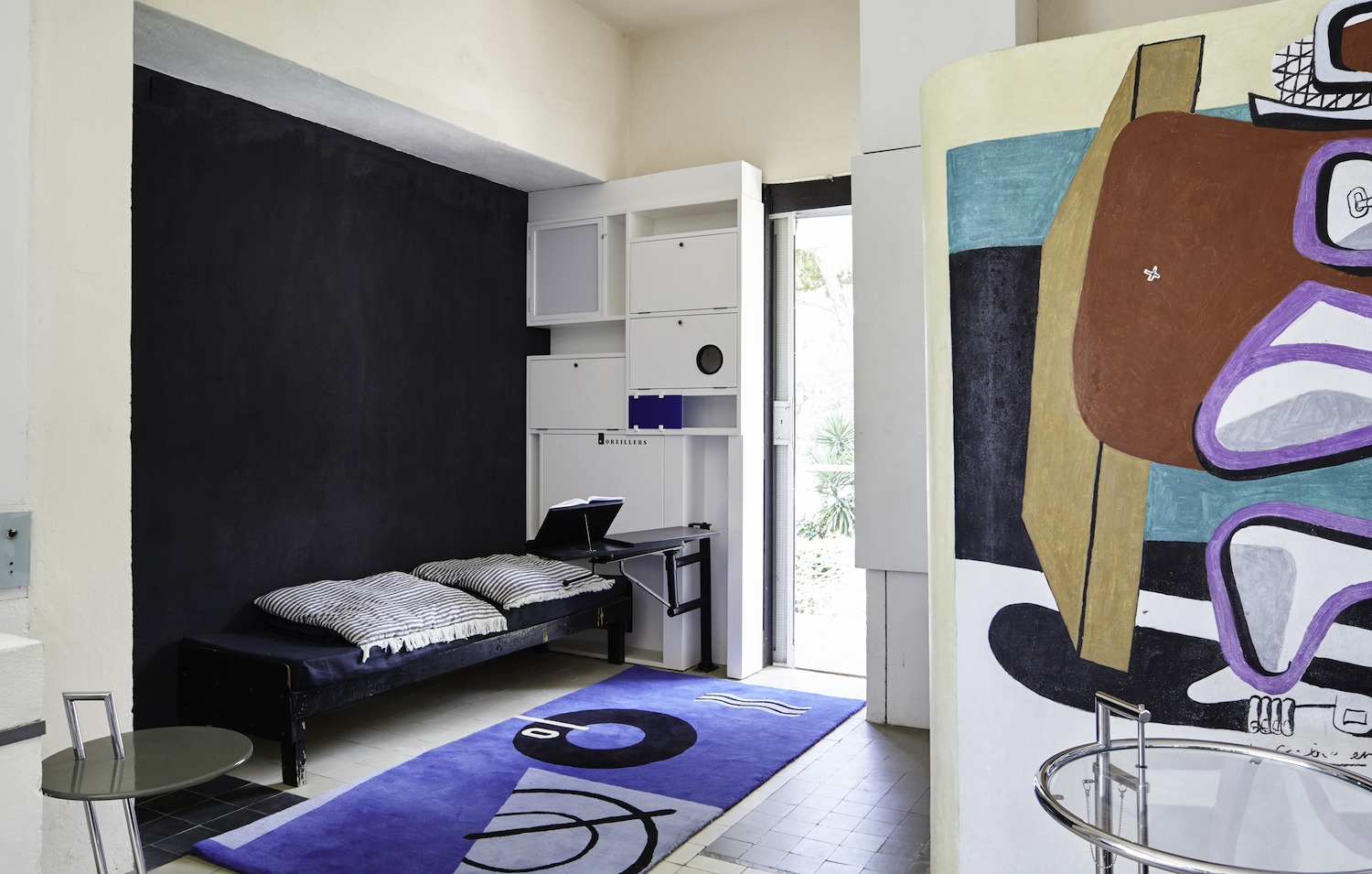 Between Monaco and Menton, on a small plot of land on the Côte d’Azur, the village of Roquebrune-Cap-Martin hosts an exceptional complex of modernist architecture. Surrounded by the scented Mediterranean vegetation, the site known as Cap Moderne has witnessed the complicated relationships of several seminal figures in the history of architecture.

It was there, on the cliff overhanging the sea, that in 1929 Irish designer Eileen Gray built her influential villa E.1027. Some twenty years later, a plumber from Nice named Thomas Rebutato quit his job to open a snack bar right beside it. Le Corbusier quickly befriended Rebutato and became his loyal customer, spending every summer there with his wife Yvonne.

The Swiss architect later built for himself the modest living quarter Cabanon (1952) on a plot of land given to him by Rebutato. In thanks, the Holiday Cottages (1956) were conceived by Corbu as functional summer houses for Rebutato’s guests. But it is Eileen Gray’s villa E.1027 that started Cap Moderne, and later became the scene of an infamous episode in the history of architecture.

Born into an aristocratic family in 1878, (her mother was the 19th Baroness Gray and her father an artist), she studied painting at the Slade School of Fine Art in London before establishing herself in Paris, where she learned the art of lacquer work and later gained fame as a polymath interior designer. By the time of E.1027’s completion, Gray had opened a shop on Paris’ fashionable Rue du Faubourg Saint-Honoré, selling her full range of designs to wealthy clients. Always immaculately dressed in couture suits, Gray was acquainted with other famous female personalities of the time such as Gertrude Stein and Alice B Toklas, the painter Romaine Brooks, and the legendary dancer Loie Fuller.

E.1027 was her first architectural project, built for Gray herself and her partner, the Romanian architecture critic Jean Badovici. While the latter made suggestions for the project, Gray took particular care in designing new furniture for the house, such as the circular chrome E.1027 table, as well as furnishing it with earlier pieces, including the acclaimed Bidendum Chair and her seminal Satellite Mirror. Gray even invented the house’s name, using a numerical code that intertwined her initials with Badovici’s: E was for Eileen, 10 for the J in Jean, (the tenth letter of the alphabet), 2 for the B, and 7 for the G.

The design of the villa was pioneering and perfectly in line with the canons of the then-nascent Modern Movement, as exposed by Le Corbusier in Vers une architecture [Towards an Architecture] six years earlier. The building is located on an arduous hill diving into the Mediterranean Sea, a simple volume supported by piers with a flat roof, ribbon windows, and an open-plan living room.

The building is located on an arduous hill diving into the Mediterranean Sea, a simple volume supported by piers with a flat roof, ribbon windows, and an open-plan living room.
Close

Yet, Gray and Badovici’s contribution to the ground-breaking language of Modernism is a lighter and more sensual version of it. E.1027 reflects their concerns over the too-often cold aesthetics of the avant-garde, “intoxicated by mechanisation”.“The poverty of modern architecture stems from the atrophy of sensuality,” Gray argued.

Indeed, E.1027 interiors are intimate and painted in soothing shades. If the villa is mostly white outside, the palette of its interior varies from gentle pink hues to marine green and indigo. Gray designed the house so that the inside and outside would merge together. Following this principle, every room gives out onto a balcony; shutters, screens, and windows are all movable, allowing guests to engage with the surrounding landscape.

Le Corbusier murals hold the right of preservation and can’t be cleared away, forever reminding us that architecture, as well as art, is sometimes a matter of envy, rivalry, and personal revenge.

While Le Corbusier famously stated that “Une maison est une machine-à-habiter,” “A house is a machine for living in,” Gray would disagree. She described E.1027 as a living organism, explaining that, “It is not a matter of simply constructing beautiful ensembles of lines, but above all, dwellings for people.”

Shortly after E.1027’s completion, Gray split from Badovici and left the house to work on other projects. Badovici remained, often visited by his friend Le Corbusier. It is during one of these frequent stopovers that, in April 1938, the architect infamously vandalised E.1027’s walls, painting two murals in the villa and returning the following year to paint another five.

The episode is almost mythical and has been read – quite rightly – as an open attack on Gray. Le Corbusier, always inclined to assert his own ideas, might have been insulted that a woman could attain such a fine achievement in a style he thought he had conceived, or he might have just been annoyed by the playful and sensual sensitivity of the house

Every room gives out onto a balcony; shutters, screens, and windows are all movable, allowing guests to engage with the surrounding landscape.

Executed in garish colours, the murals blatantly clash against the refinement and gentleness of Gray’s interiors, severely affecting the general experience of her quiet architecture. A famous photograph depicting the architect, naked and taking a pause from painting one of the murals, documents the defacement. Gray was already somewhere else, busy with new projects. After World War II she returned to Paris and led a reclusive life, putting aside the design industry until the 1970s when Zeev Aram convinced her to produce her pieces on large scale, rediscovering her talent.

In the meantime, E.1027 had been abandoned. During the war, German soldiers occupied it and used its walls for target-practice. The villa changed owners several times; one of them, Heinz Peter Kägi, a shady doctor from Zurich, was assassinated in the house in the 1990s. E.1027 was then squatted and vandalised, until an arduous and highly-criticised restoration has recently brought the villa back to its original state, or almost so. Although objectionable, Le Corbusier murals hold the right of preservation and can’t be cleared away, forever reminding us that architecture, as well as art, is sometimes a matter of envy, rivalry, and personal revenge.

Interestingly enough, Le Corbusier died in 1965 while swimming in the very water in front of E.1027. After years of obscurity, Eileen Gray has today gained an unprecedented, international success.

This Japanese architect set up the space named Happa in Nakameguro, Tokyo, where he has his own studio and very special shares mates.

Dutch artist Birgitta de Vos transformed an old dry bulk carrier into a unique houseboat, a place to reflect, an art gallery and a work of art in itself.