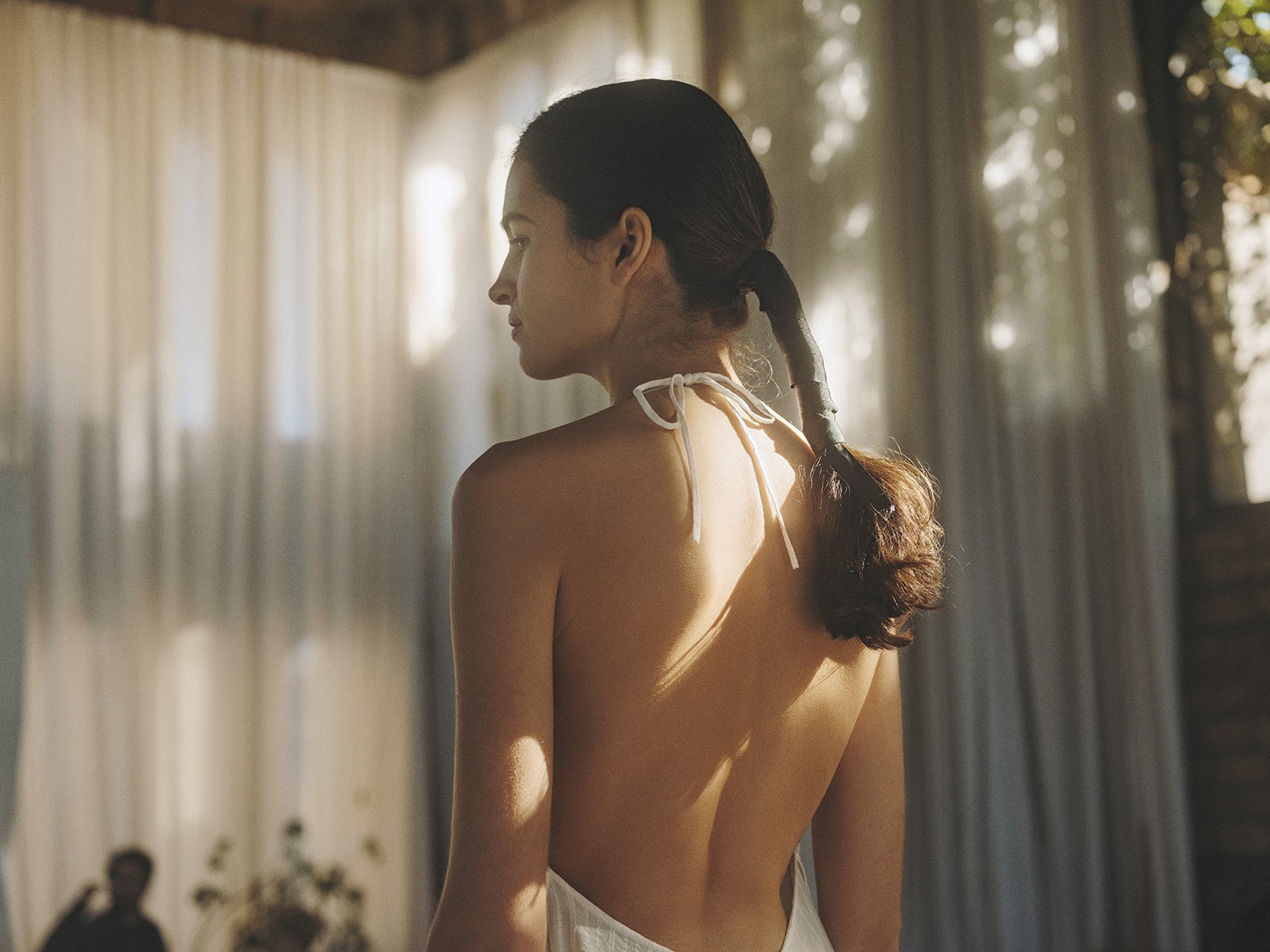 Pablo Bofill holds his hands together; he is frozen. “Before starting, it is necessary to warm up,” he says while he starts pouring some tea. We sit by the marble table at the spacious kitchen in la Fábrica, an old concrete factory located in Sant Just Desvern, just outside Barcelona.

Pablo’s father, world known architect Ricardo Bofill found this mighty building in 1973 and transformed it into both a family home and the headquarters of the Ricardo Bofill Taller de Arquitectura (RBTA). In 2010 Pablo joined the enterprise. 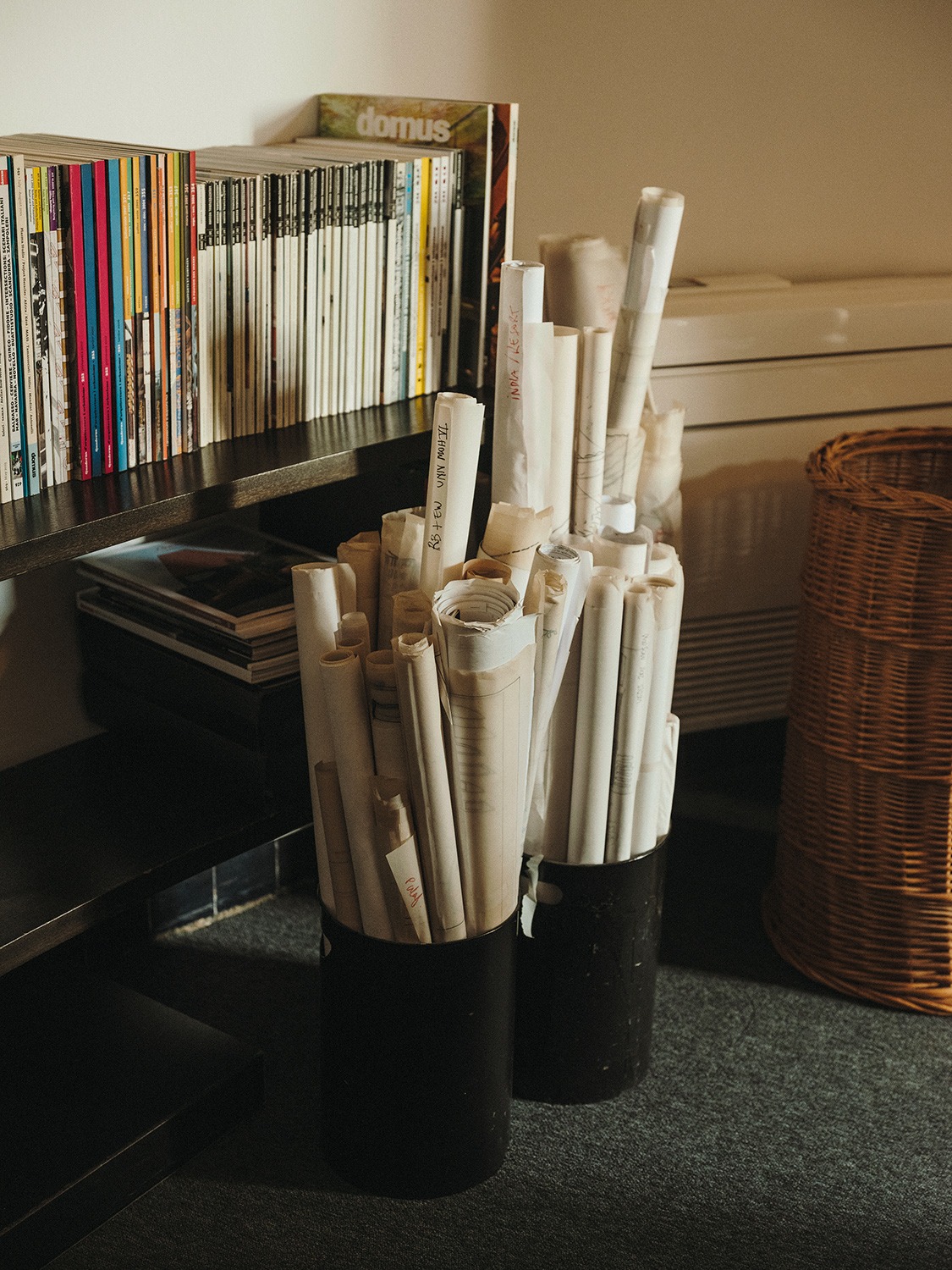 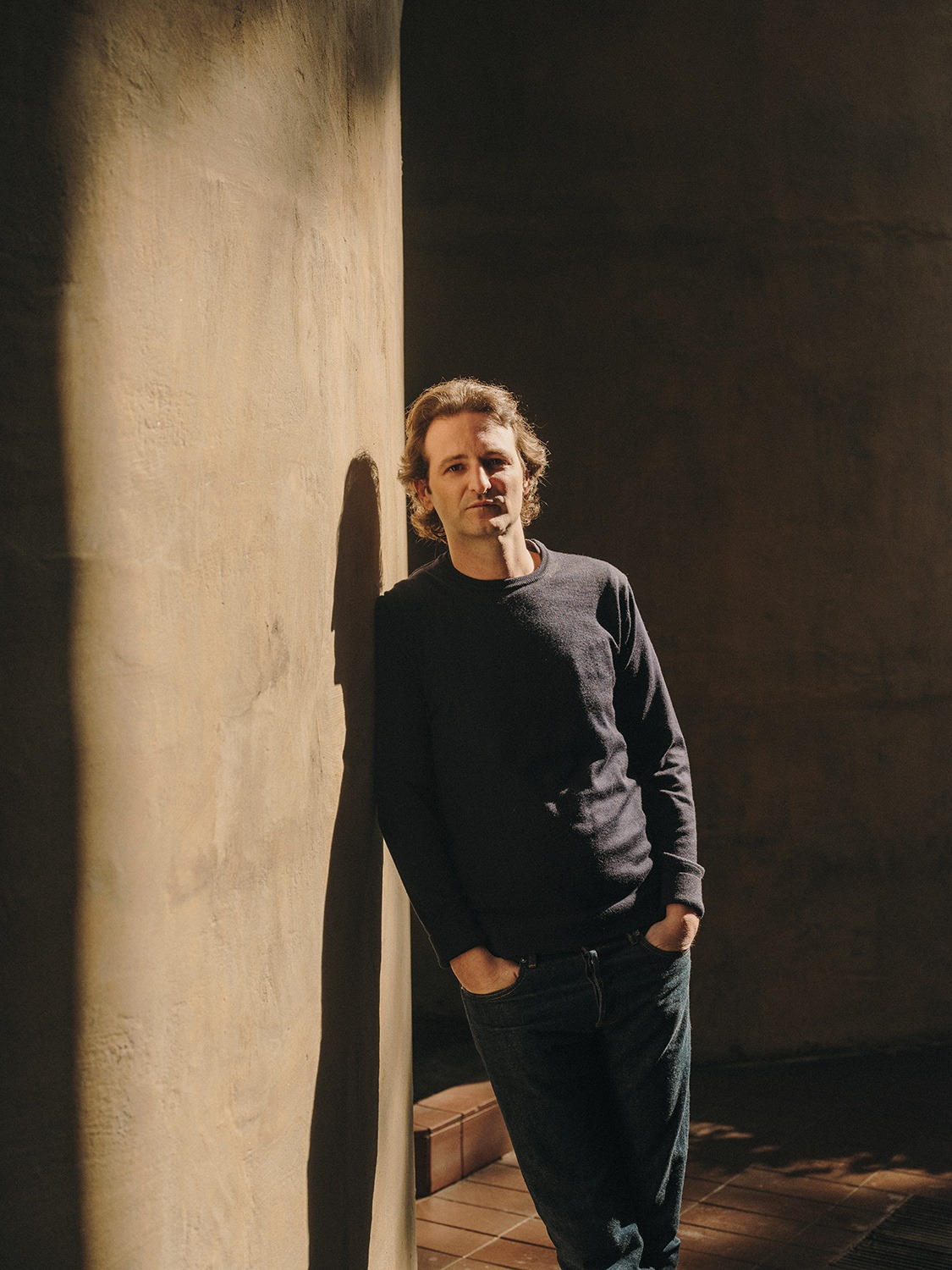 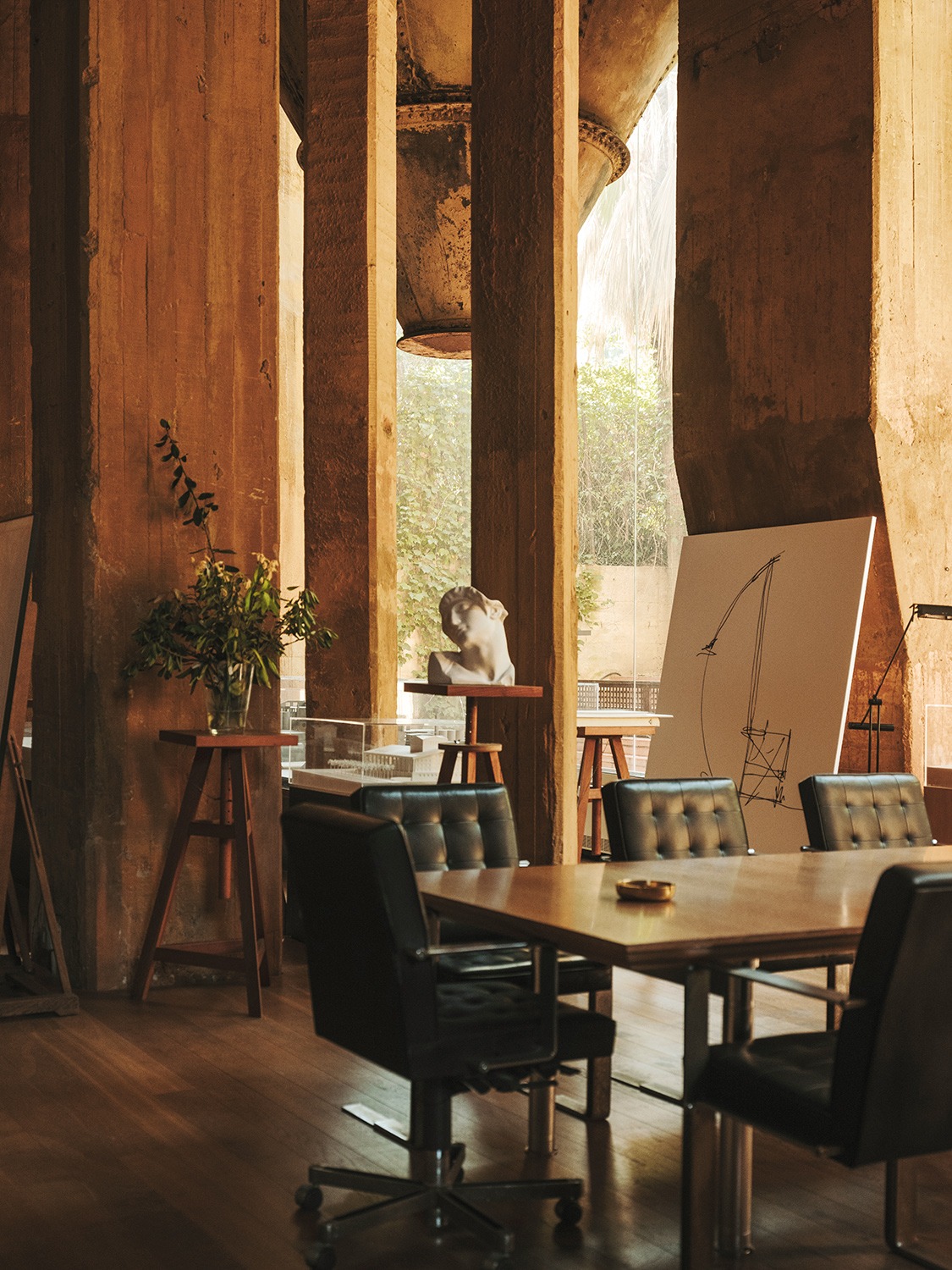 «C’est une vraie question de psychanalyste», is the response when I inquire about his childhood. We agreed to speak in French. If I am going to psychoanalyse him, it better be in his maternal language, although he could easily switch to other languages, an exercise he practices daily.

I ask whether his father was present during his childhood. “Enormously”, he answers without any hesitation. “I grew up in Paris and at the time his main office was there; we always had a solid relationship.” Pablo remembers they went traveling together as often as possible. “He treated me as an adult, our conversations were really stimulating.” There is admiration in his vivid memories and he goes on: “I grew up surrounded by creative characters in a city were culture is present everywhere and equalizes people. As a teenager, however, I became like a bourgeois. I wanted to be like other people, I was scared of the artist’s life.” 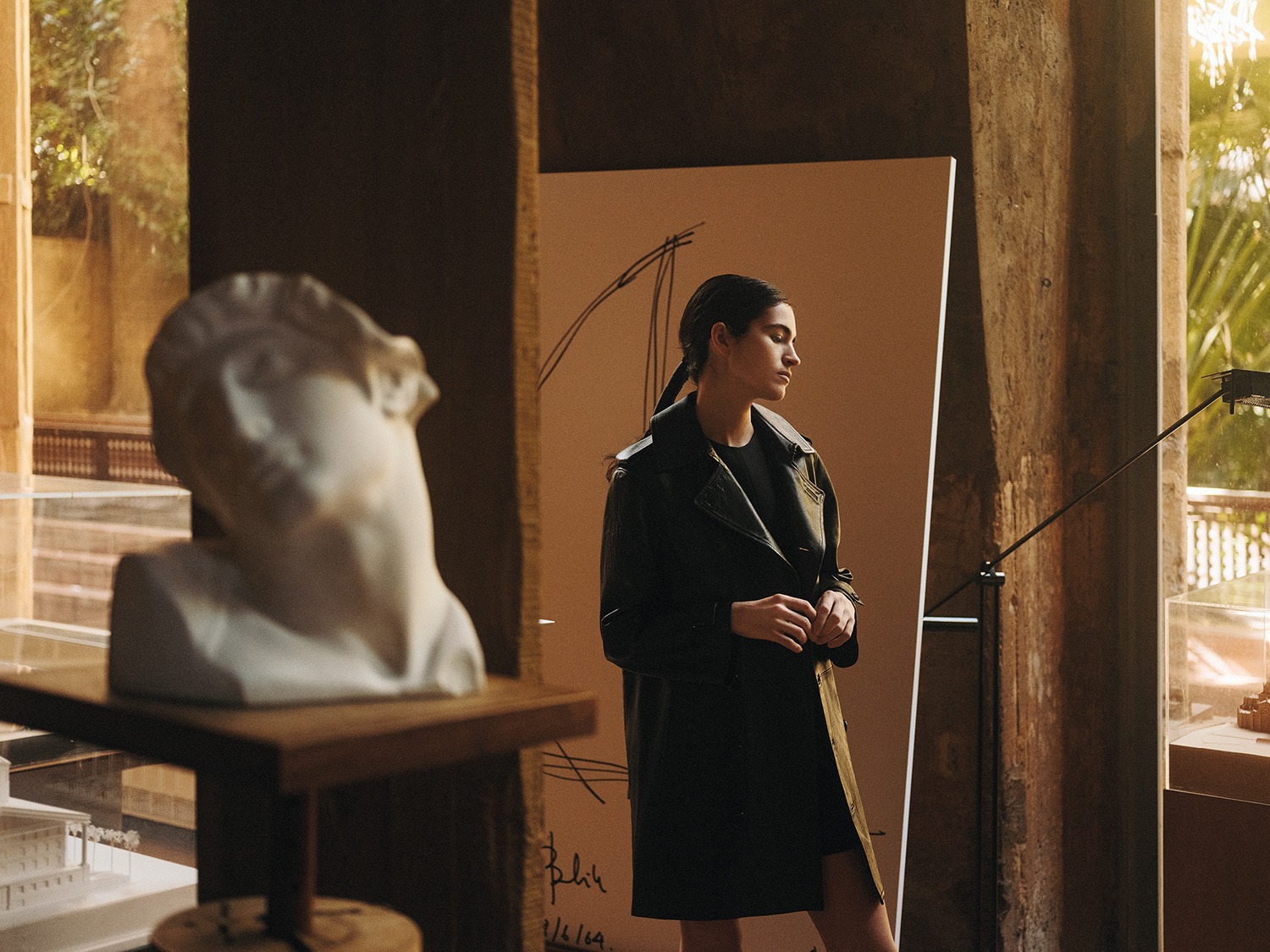 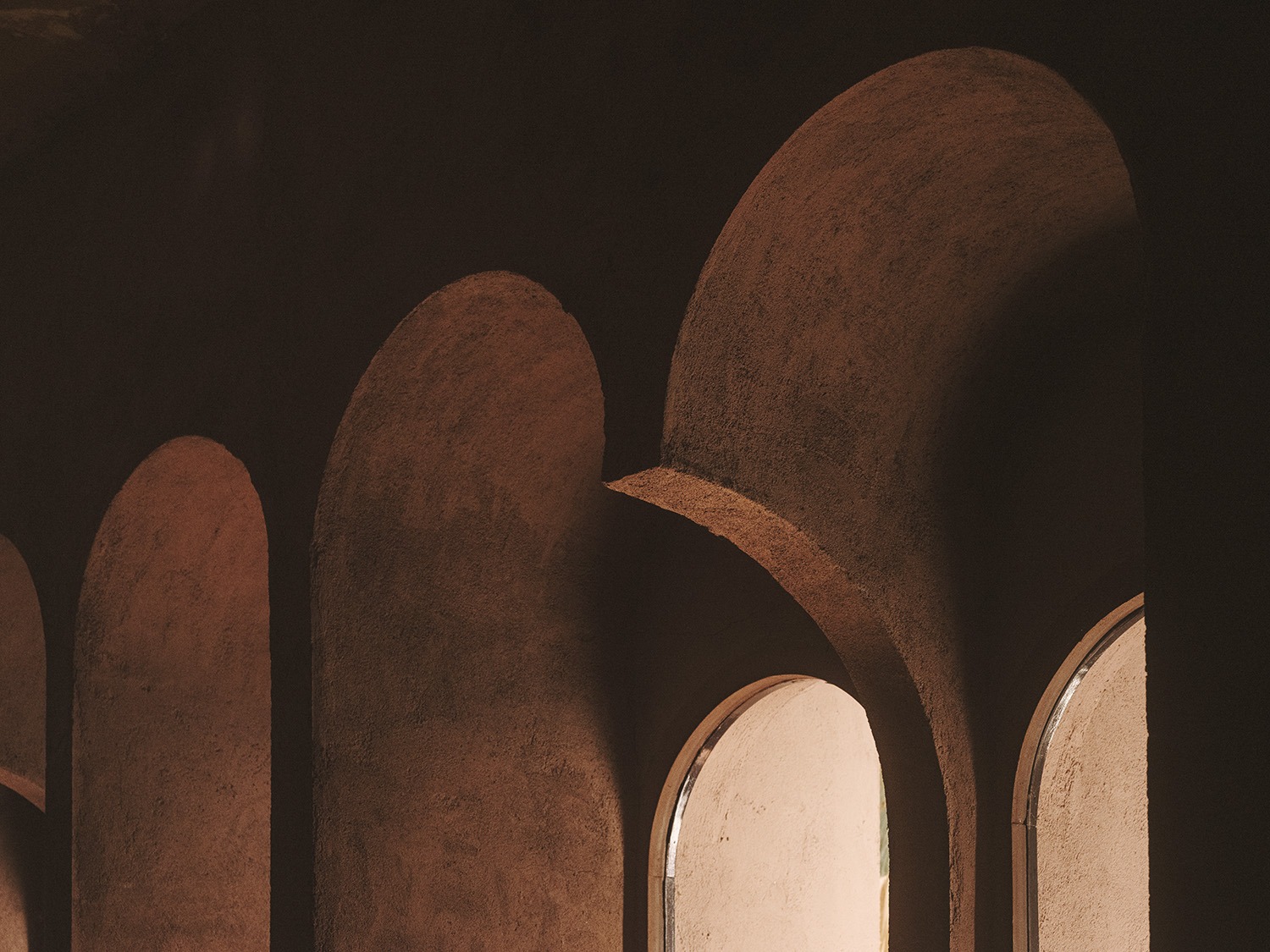 Pablo’s serious and polite demeanour somehow reminds me of an enigmatic character out of a nouvelle vague film. He tells me he planned to study economics at a Grande école in Paris, but that didn’t work out. So, he moved to Barcelona. “I arrived here on the 11th September 2001: the end of the theoretical XXth century coincided with the beginning of my new life.” He enrolled in ESADE business school where he was deeply bored, but adds, “I was lucky to make my own projects in parallel. I also met great people there and got some knowledge that I could later apply to my own interests.” 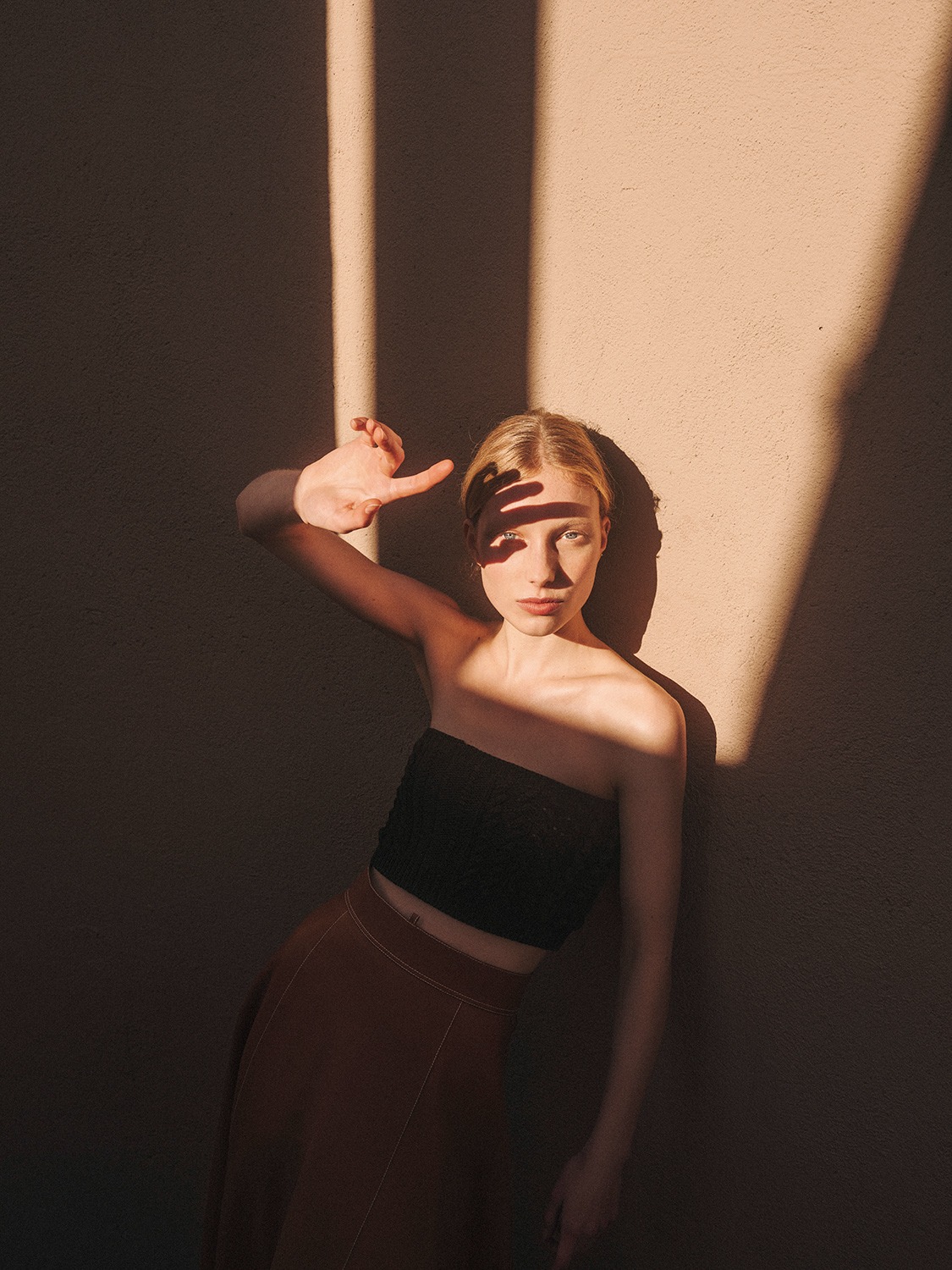 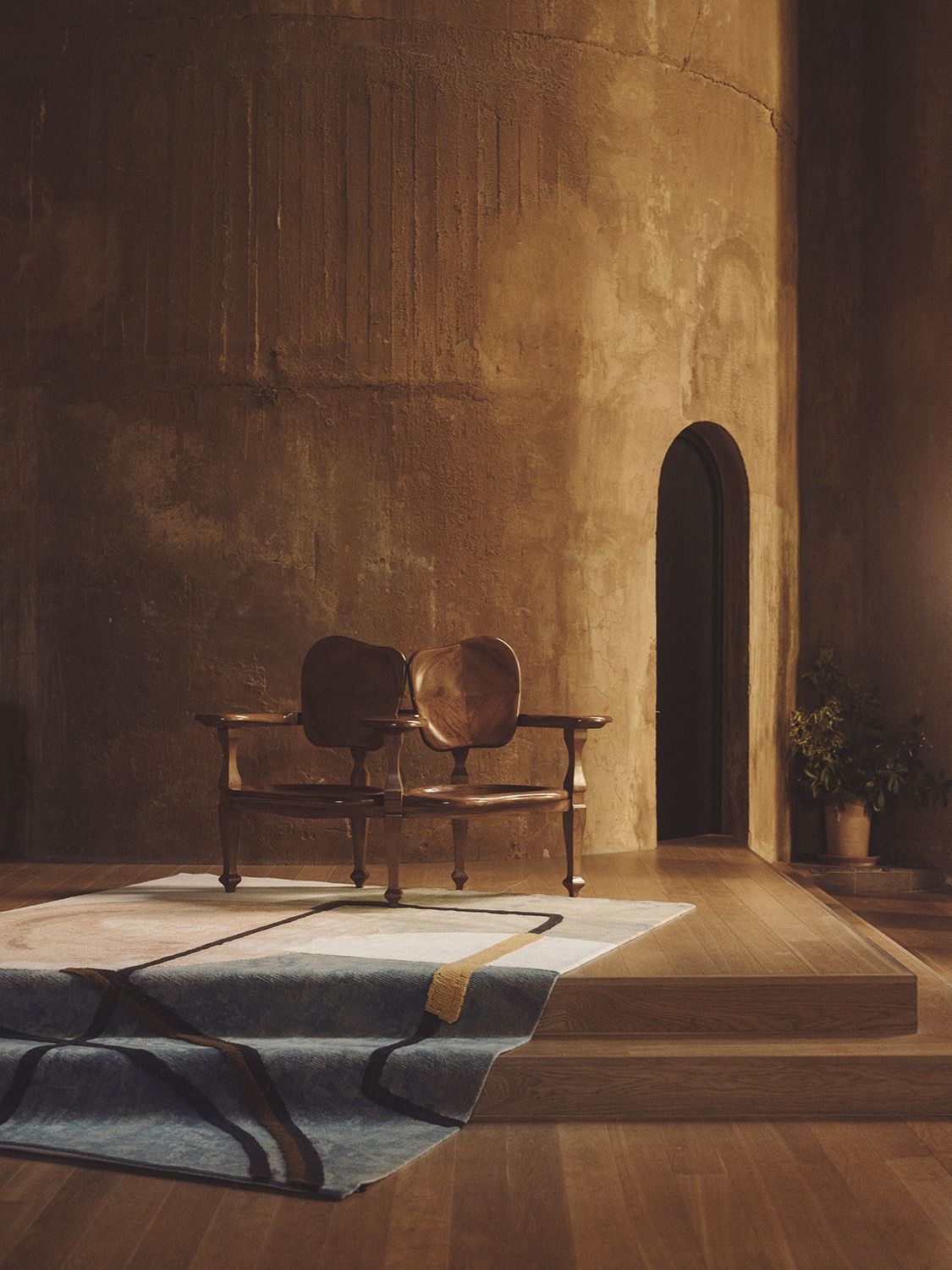 Rug by FAYE TOOGOOD for CC-TAPIS

So, what are his interests? Economy? “Not at all, I always loved transforming individual ideas into collective ones. I like the role of a producer–whether it is for a short film or when I worked for five years in Africa collaborating with various international organizations developing affordable housing.” I feel Pablo is much more at ease speaking about his current professional life than about his youth or upbringing. “Since I joined RBTA, I aim to help creators to express their ideas and turn them into realities instead of utopia. My role here is to make things exist. What does existing mean?” he asks himself rhetorically and continues, “communicating with clients, finding the right team for each project…” 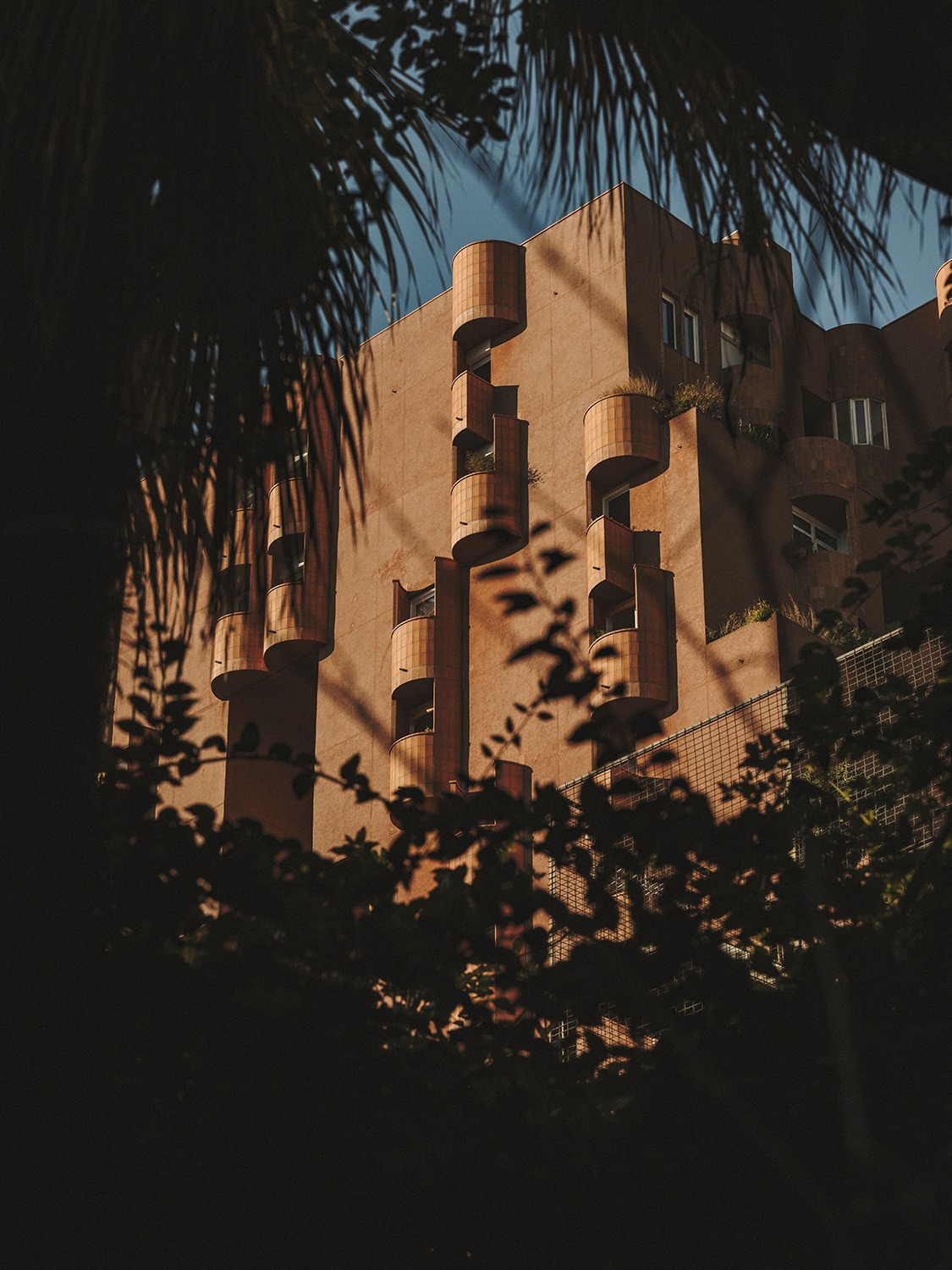 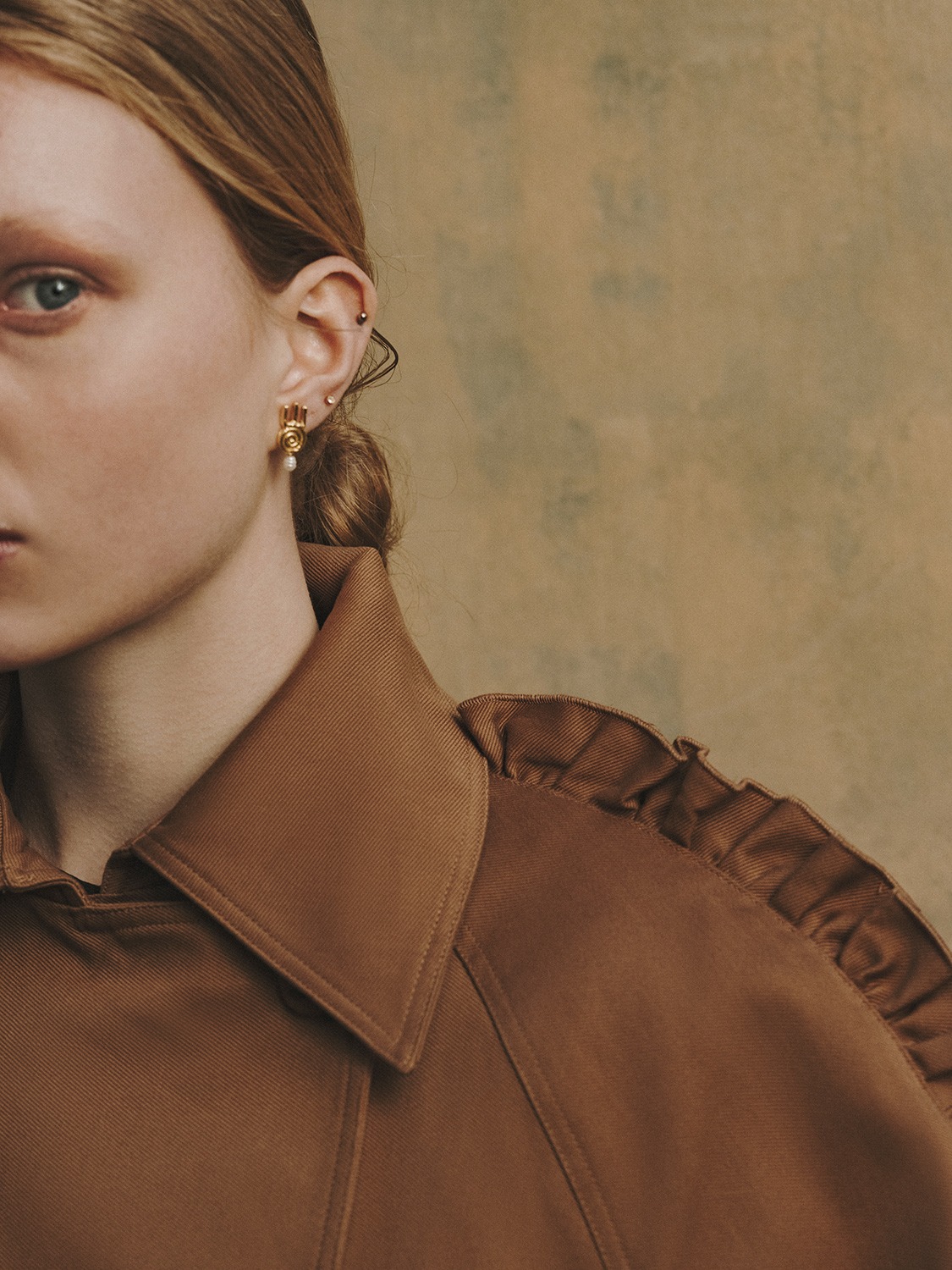 Trench by MAX MARA
“I grew up surrounded by creative characters in a city were culture is present everywhere and equalizes people. As a teenager, however, I became like a bourgeois. I wanted to be like other people, I was scared of the artist’s life.”
Close 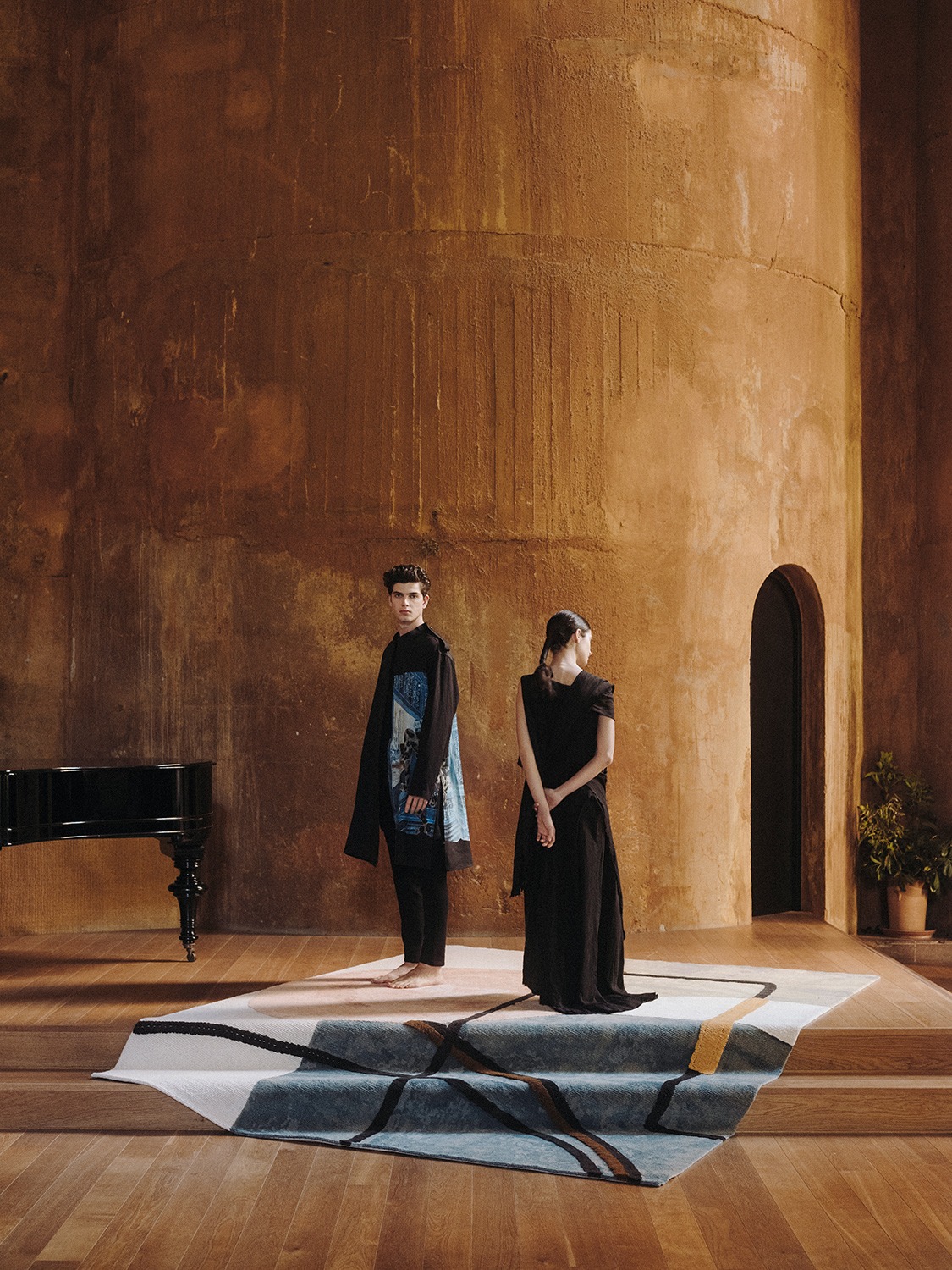 Both wear YOHJI YAMAMOTO Rug by FAYE TOOGOOD for CC-TAPIS 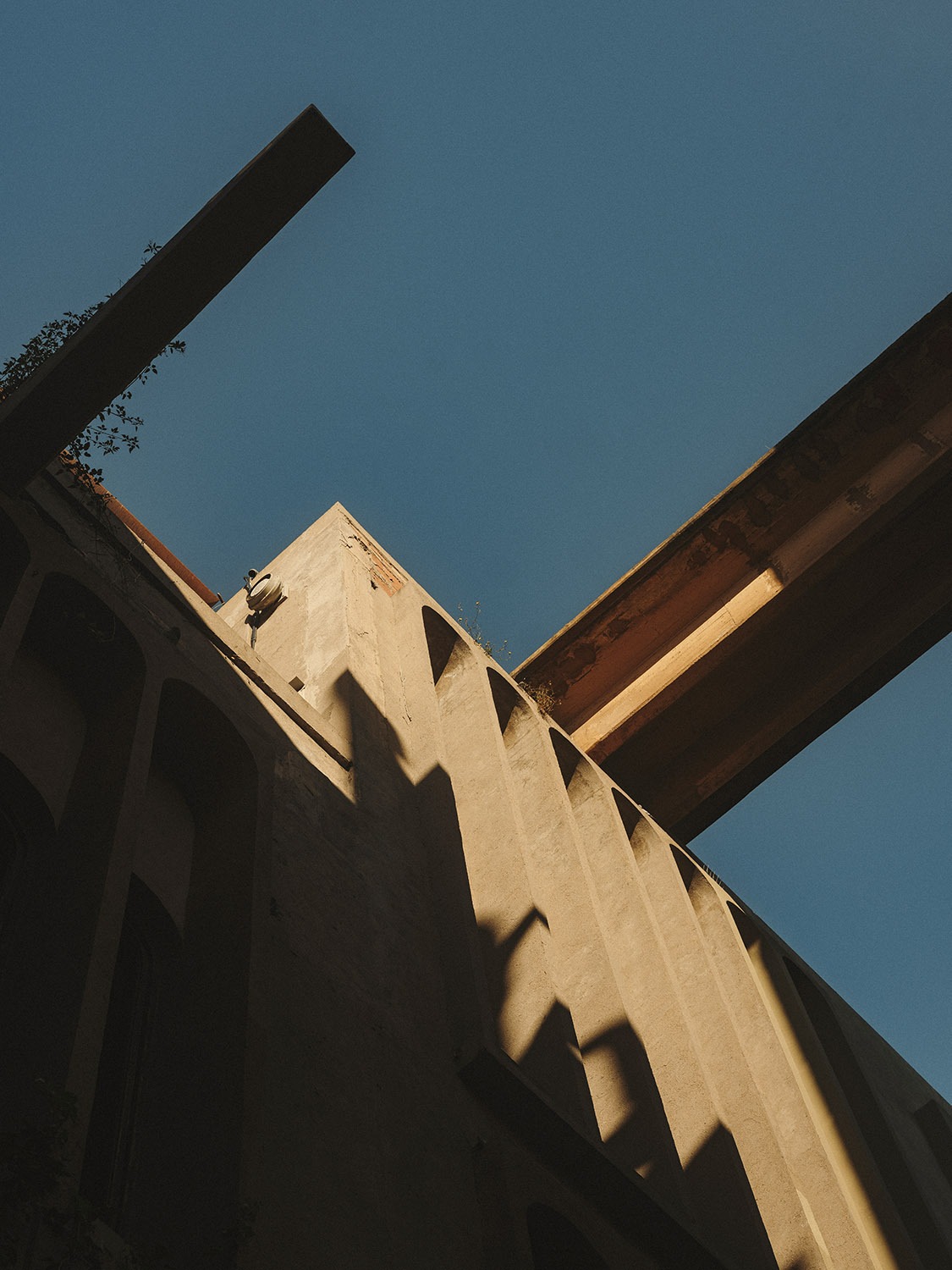 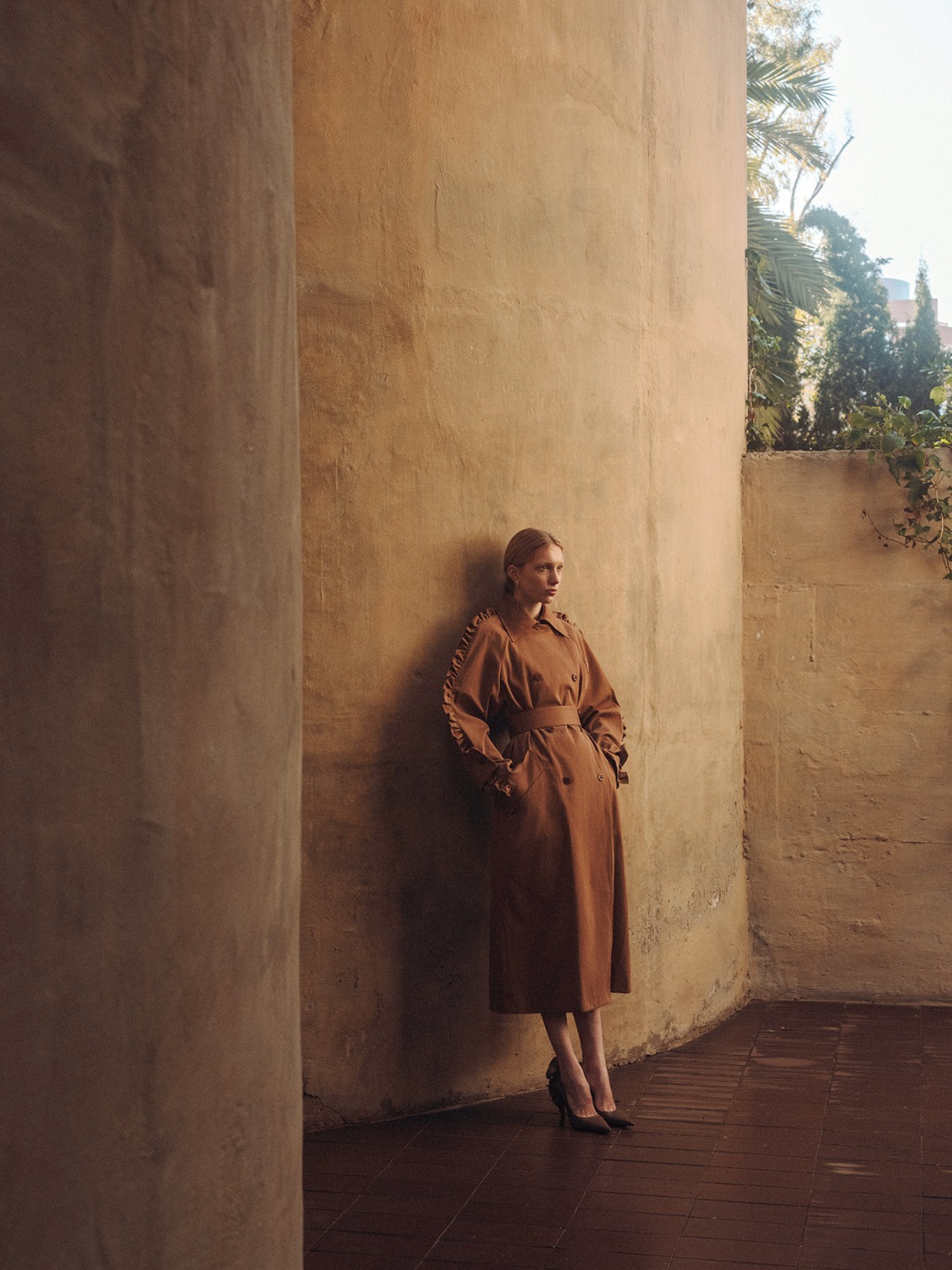 Pablo gives a particular importance to the people with whom he works: “I have a great admiration for this team, a diverse group from all over the world, their social or economic origin doesn’t matter. They all have a great trajectory behind that translates into an enormous richness in their work. The studio has a premise that Ricardo developed over sixty years of experience: not repeating the same architectural vocabulary. Each commission is adapted to its specific demands. Therefore, you need a team that is capable to take these challenges.” In terms of organization and structure he points out: “Hierarchy is not fundamental here.” 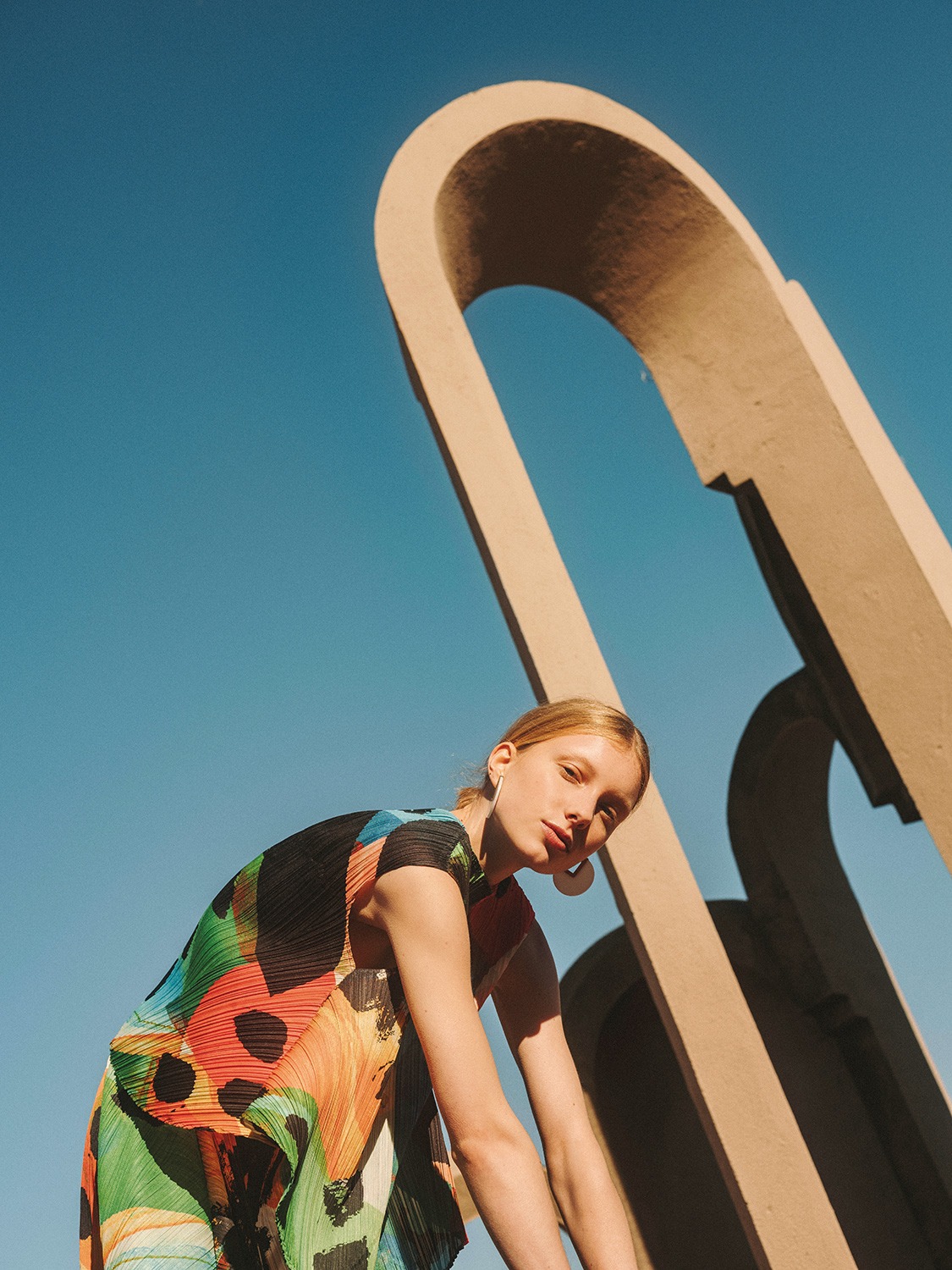 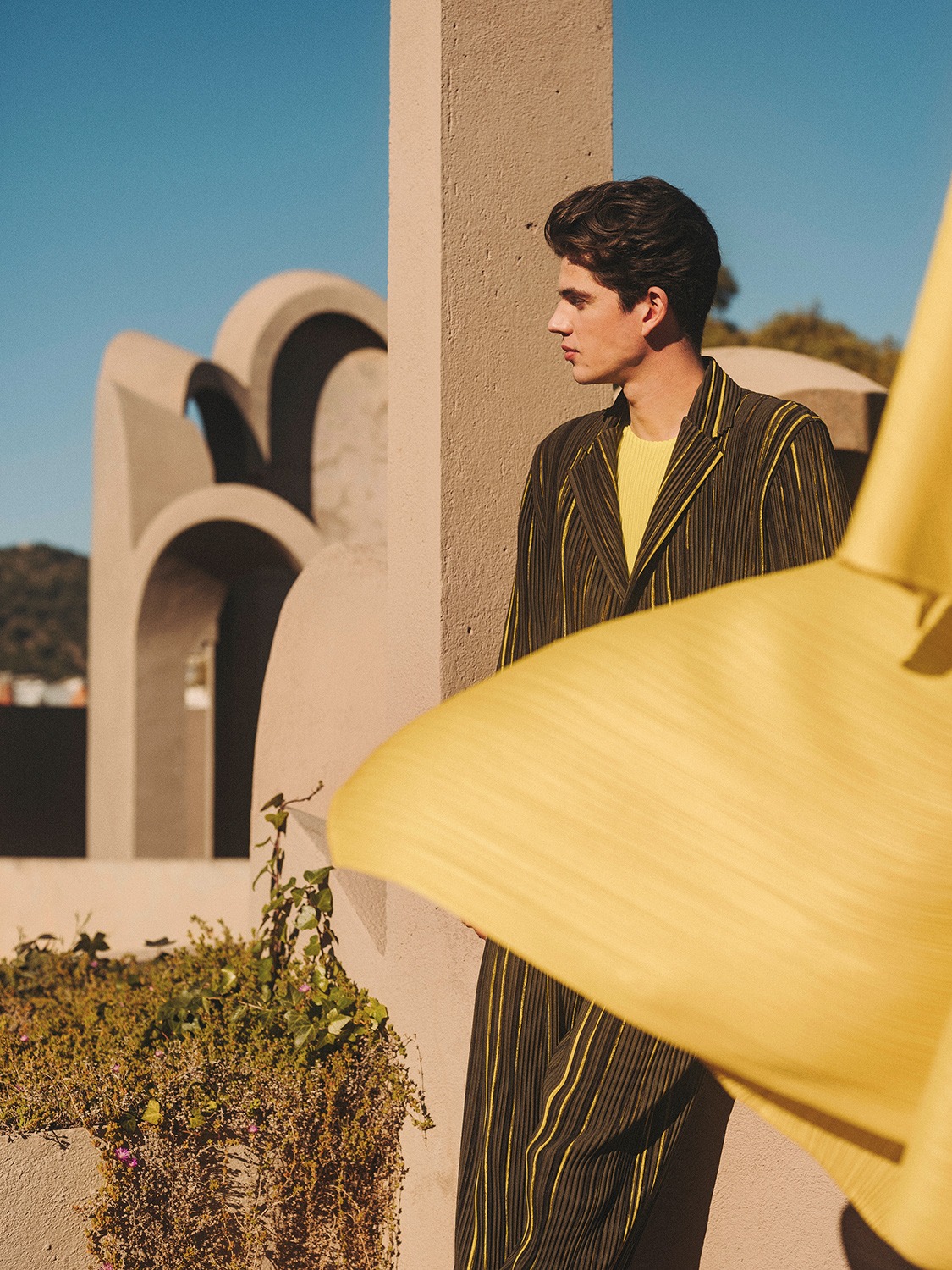 The world is facing many paradigm changes. How do they translate in RBTA’s projects? “There is an undeniable green revolution going on. It is no longer an aspiration but a need, almost an obligation and this has a direct impact on architecture. I notice as well, there is a change of scale. We came from a more metaphysical paradigm and now we are slowly turning towards one where humans are in the centre.” He makes a short pause, reflects and goes on with determination: “I think global consciousness is strong enough. Our generation has a role to play, there are extraordinary people working hard to achieve the best results.” 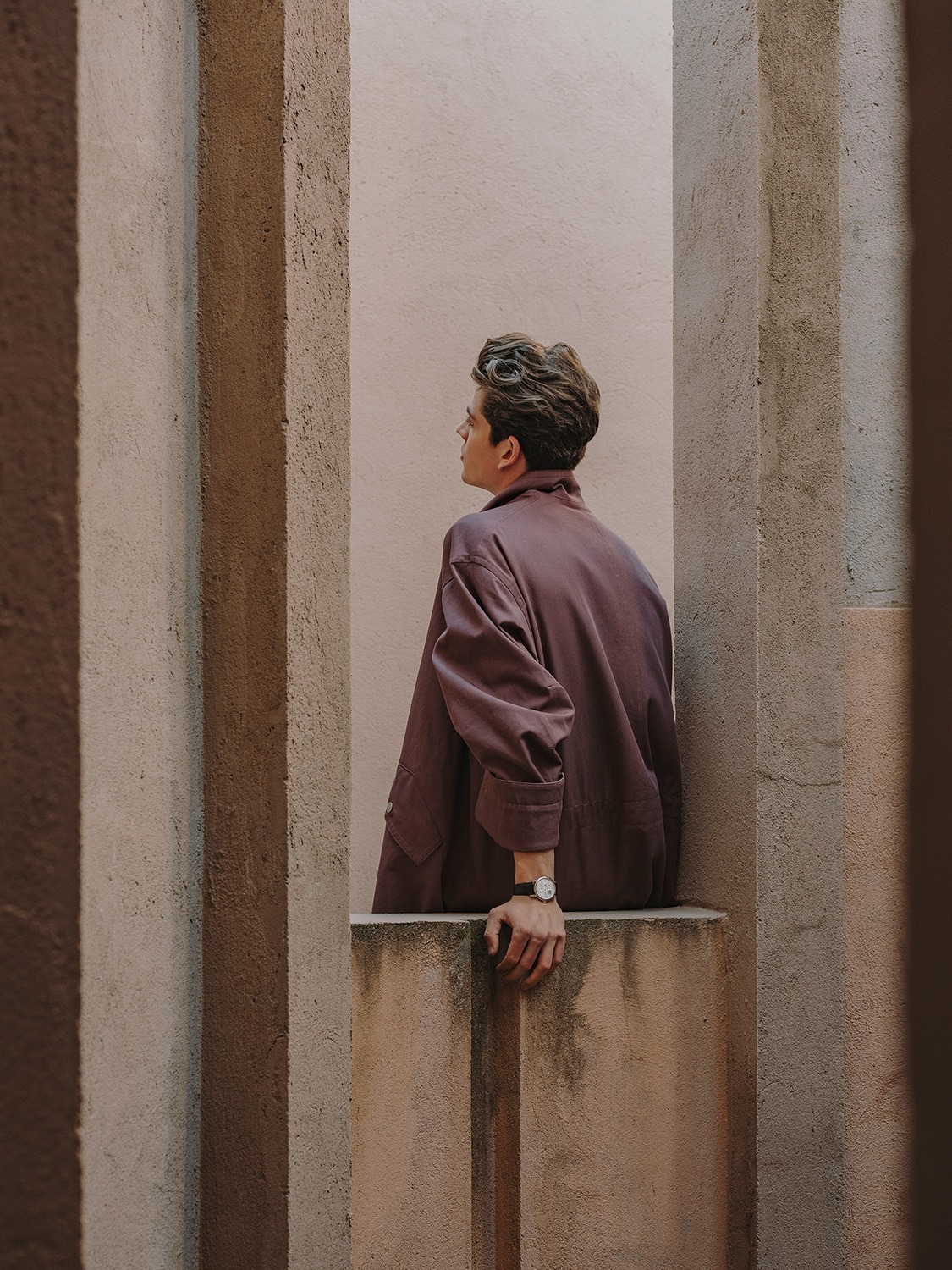 Coat by HERMÈS. Watch by A. LANGE & SÖHNE 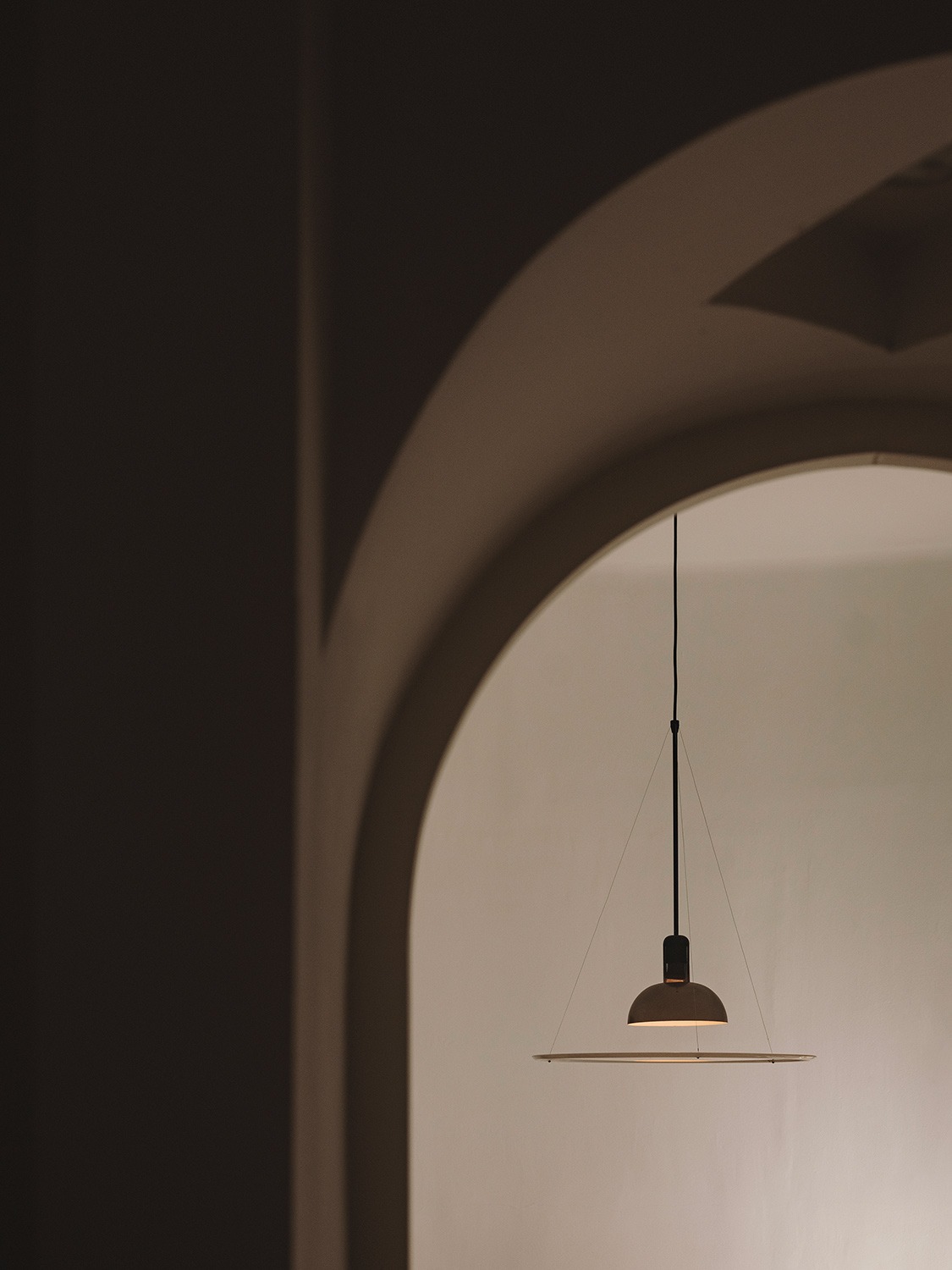 Lamp by ACHILLE CASTIGLIONI for FLOS
"My role here is to make things exist. What does existing mean?” he asks himself rhetorically and continues, “communicating with clients, finding the right team for each project...”.
Close 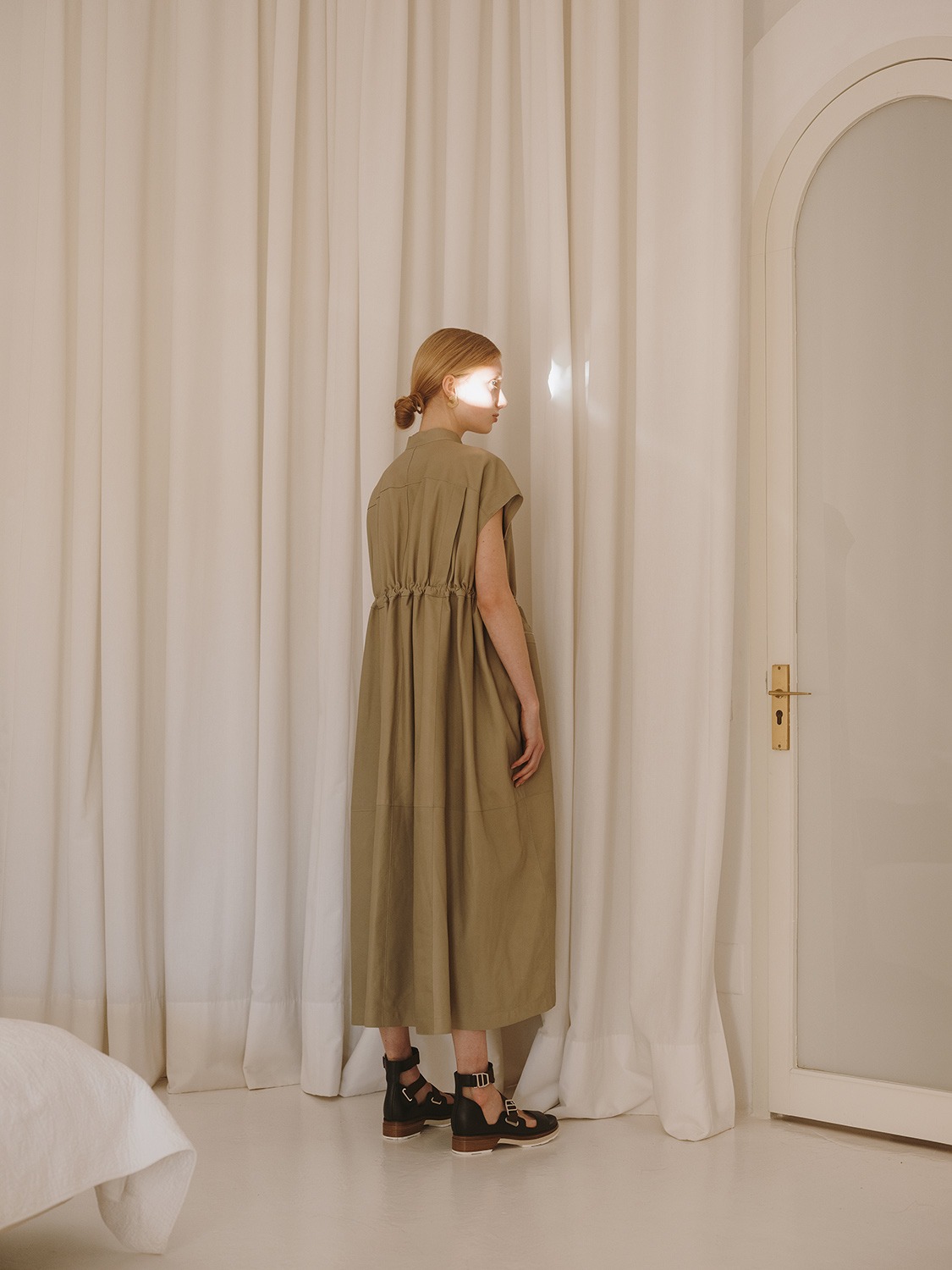 At some point Pablo mentioned how La Fábrica is a sort of monastery where professionals are able to isolate themselves from the outside noise and work intensively. While I find my way out through patios surrounded by lavish greens, I get a glimpse of this idea. Stepping into the nearby noisy road feels like a violent waking. Humans tend to aspire to luxury, but in the RBTA it is constantly redefined towards a contemporary idea based on frugal qualities: the research of the essential, complex yet efficient ideas creating healthy and harmonic environments for people to develop their potential. 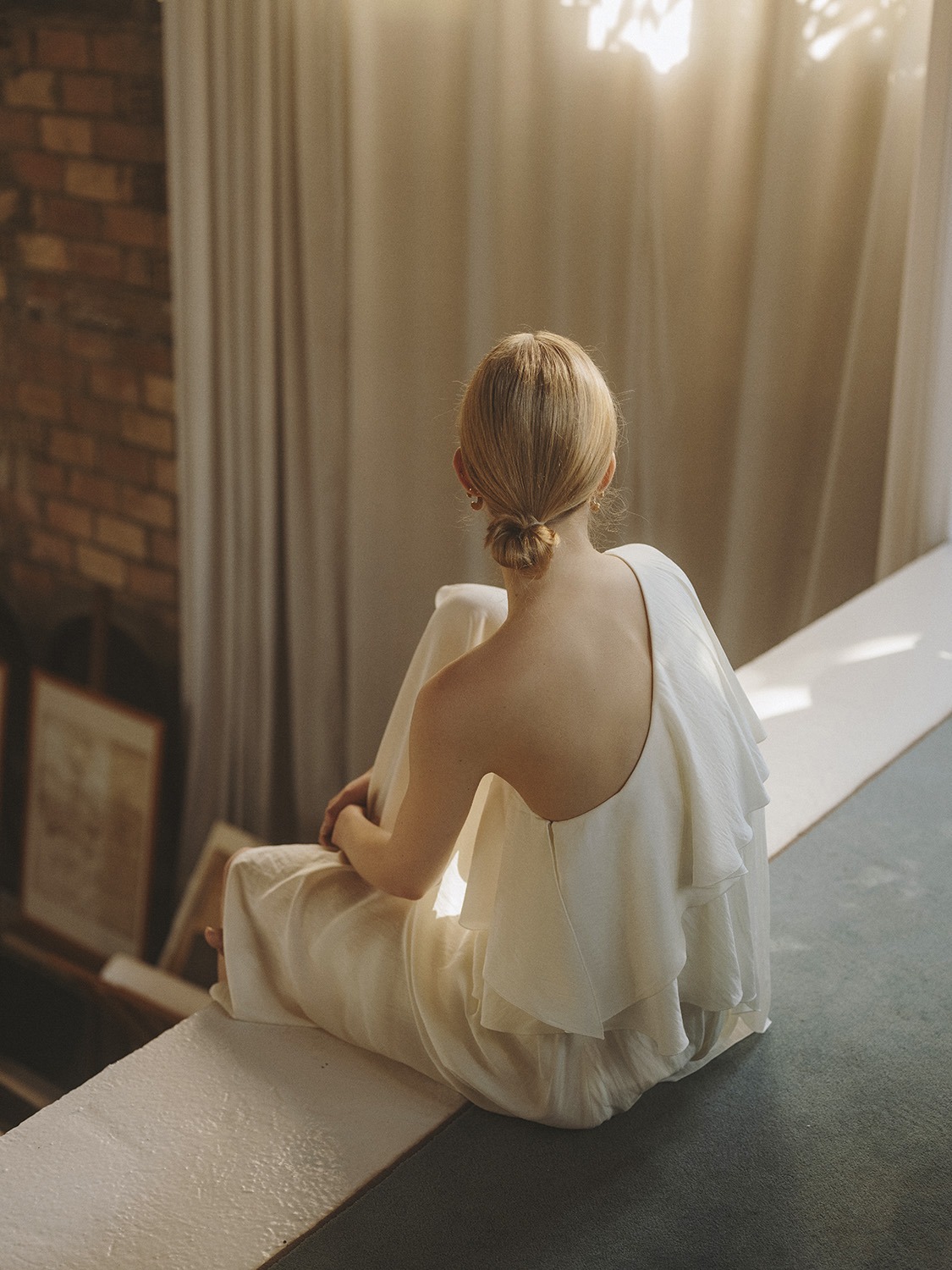 Dress by LANVIN from LUISAVIAROMA 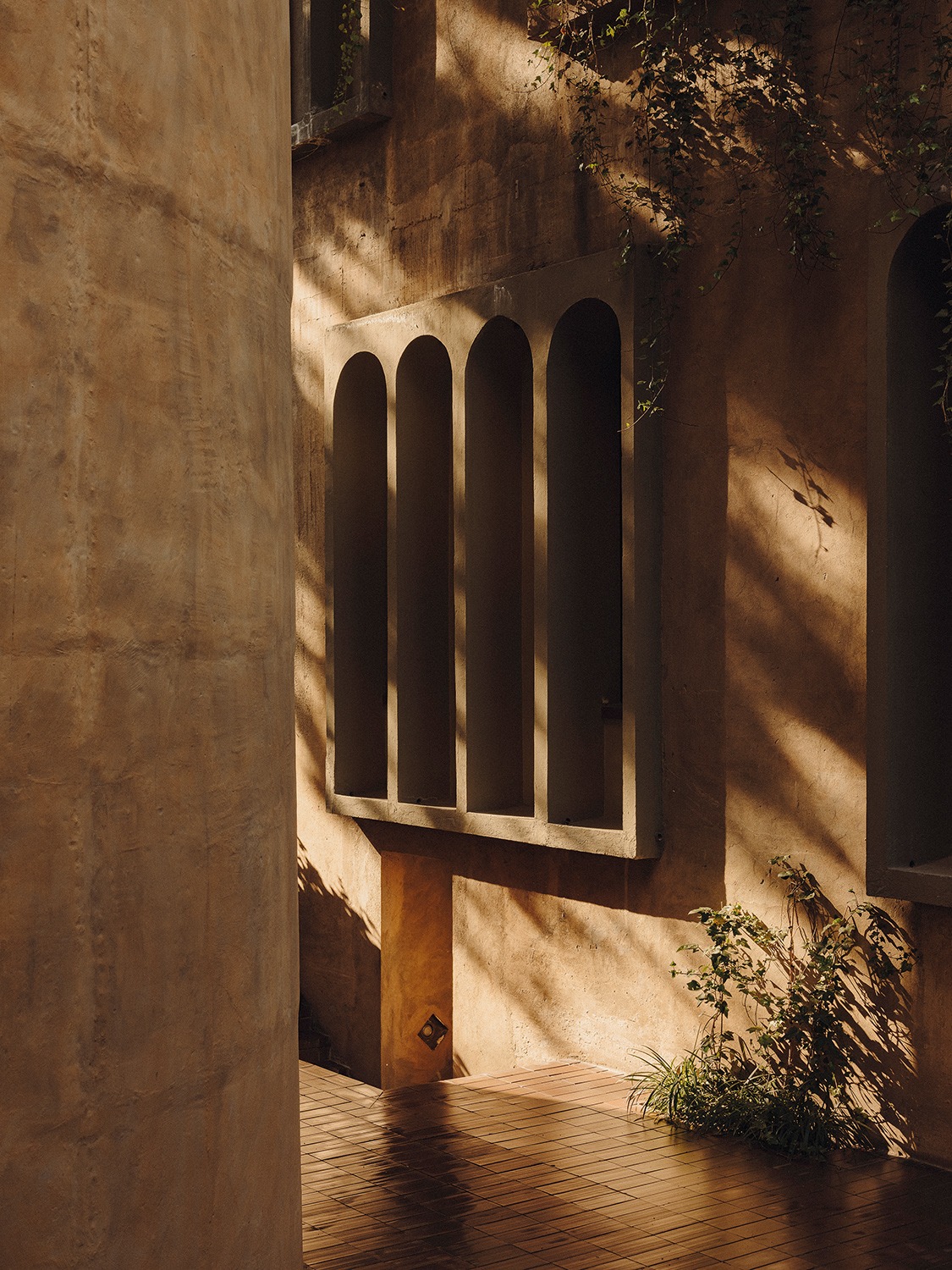 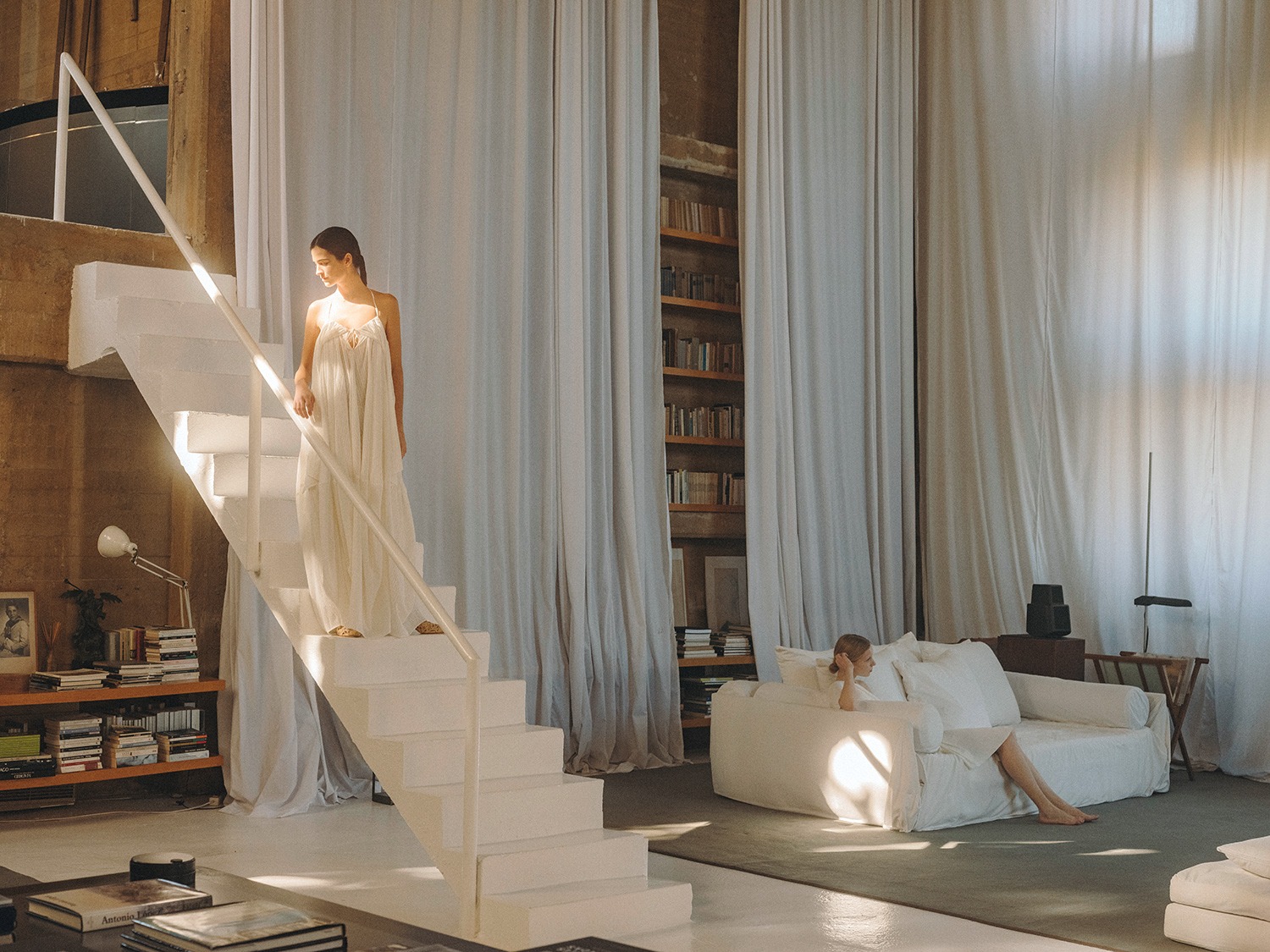 Left Dress by JACQUEMUS and shoes by ZYNE. Right Dress by LANVIN. Both from LUISAVIAROMA
Share
Barcelona, Editorial, Issue 11, Spain

In the Shadow of Bo Bardi

A virtual house that sits between this delicate and airy essence and a more brutal and primitive aspect.

With the invention of the concept of a house and studio, a new approach to indoor living emerged.