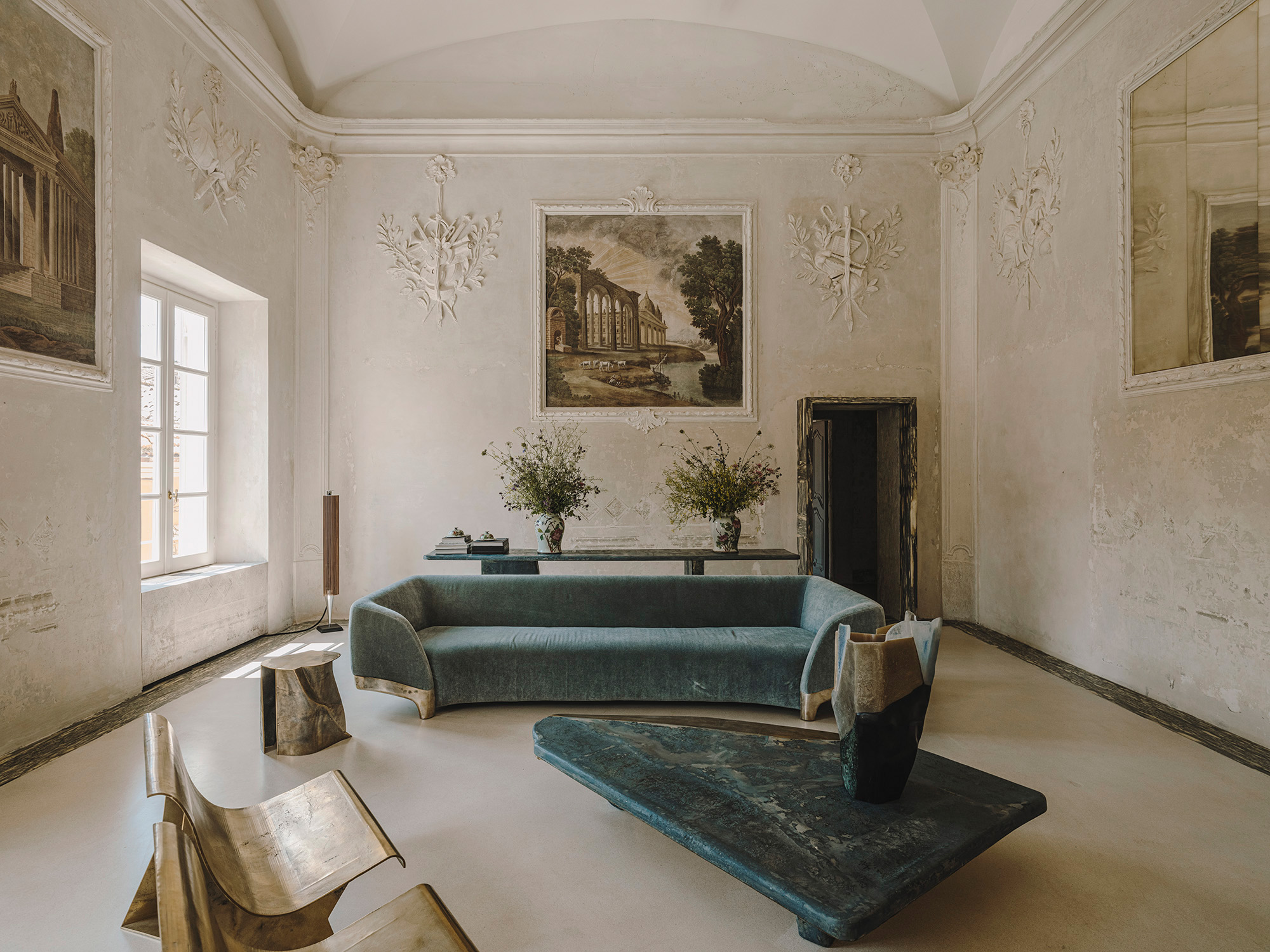 The essence of time

Everyone is familiar with one of the opening scenes of Proust’s In Search of Lost Time, when Marcel, the novel’s protagonist, dips a madeleine into a cup of tea and triggers a flood of apparently buried recollections. The cake he was eating in that moment rekindled his memory, bringing him back to the same flavour he had discovered in childhood.

Claudia Rose De Cotiis, wife of Italian architect and artist Vincenzo De Cotiis and CEO of their company, had a similar experience when she first entered the villa of Palazzo Digerini in Pietrasanta, a small town of about twenty-four thousand inhabitants nestled between the hills and the sea. When she detected the scent of holy water mixed with incense wafting from the walls of what was once a convent inhabited by nuns at the end of the nineteenth century, the abandoned and partially destroyed building in all its serenity allowed her to experience a sense of ancient spirituality and brought back the same memory of childhood as that flavour had to Marcel. 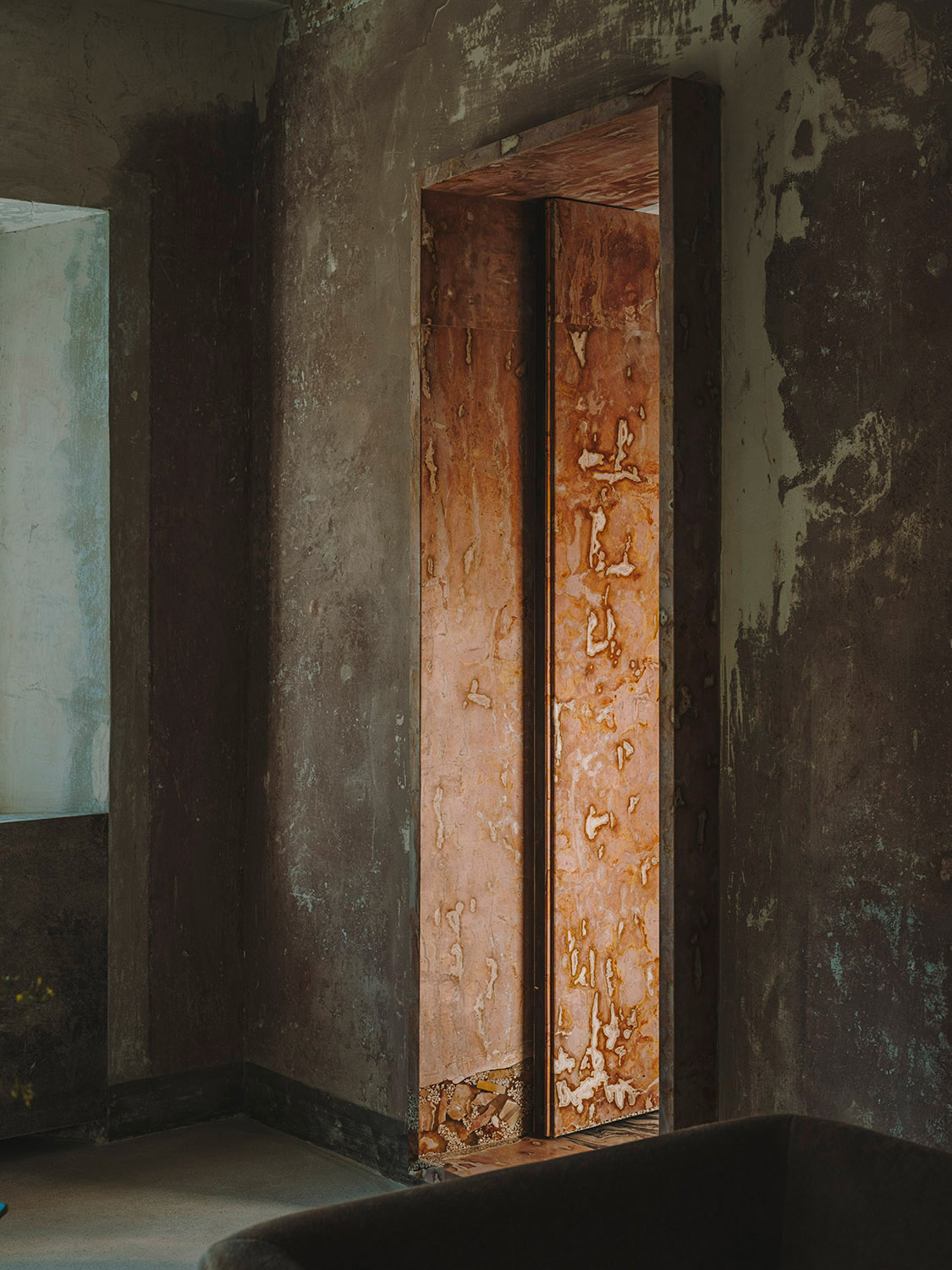 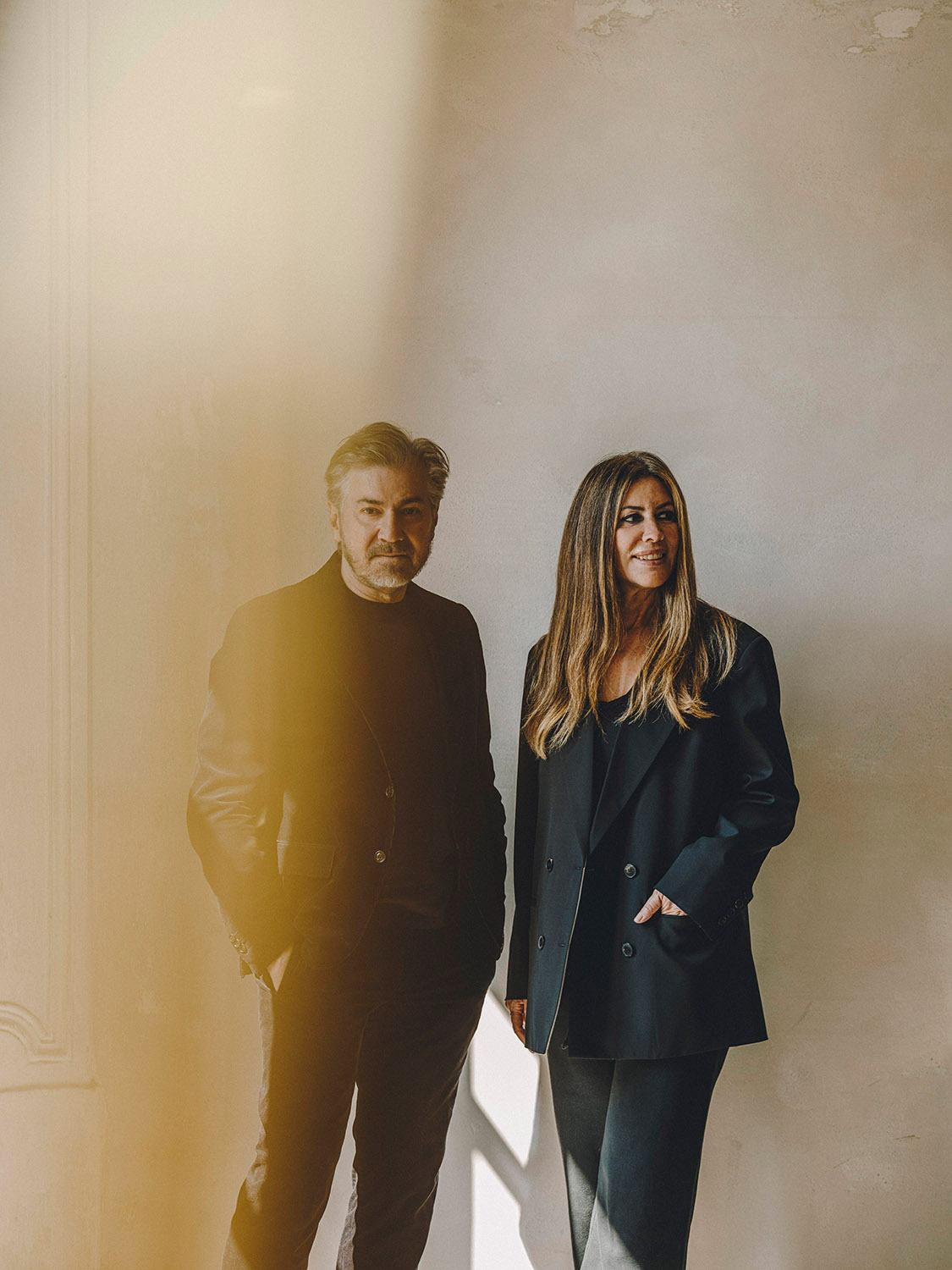 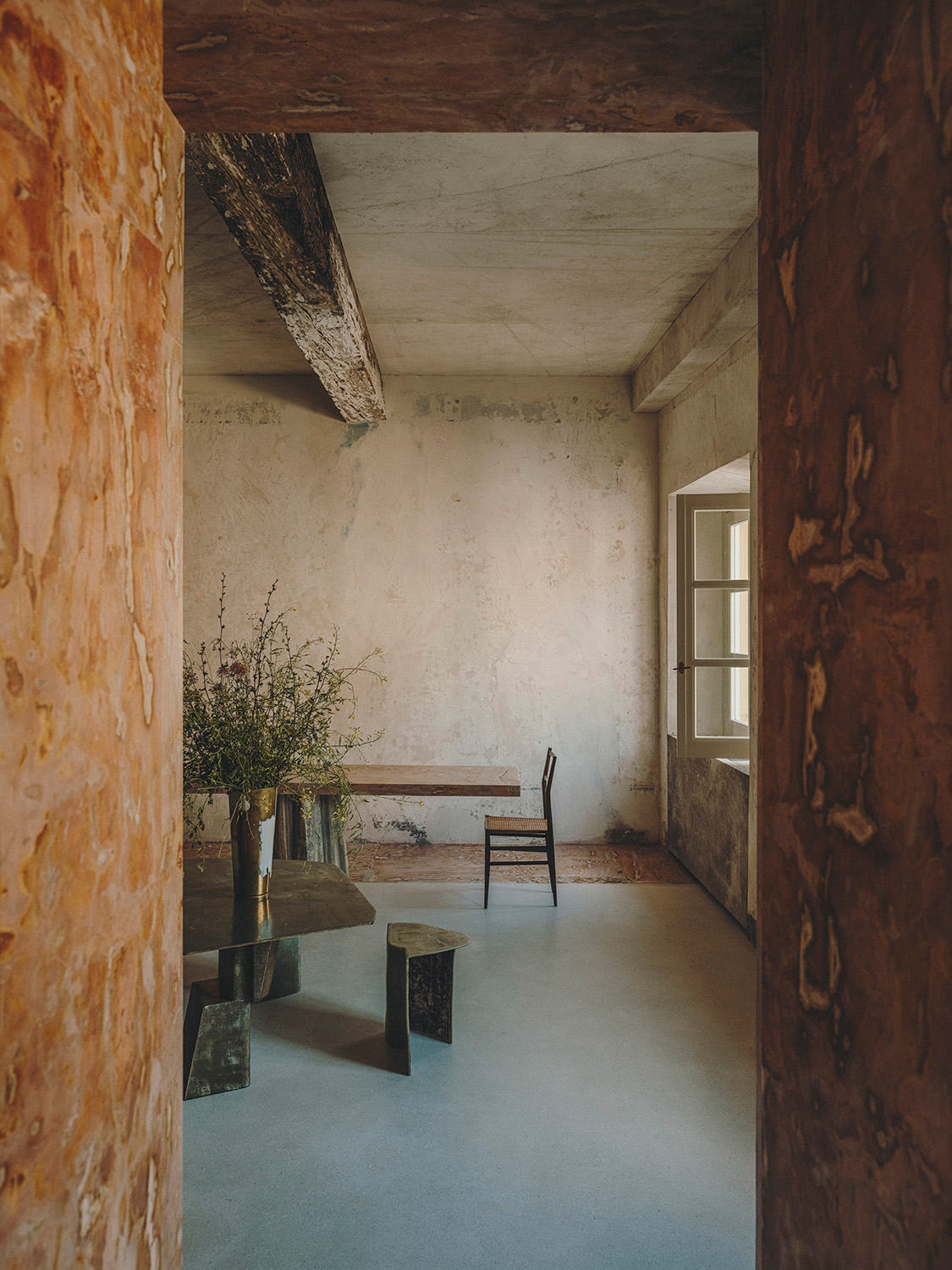 “All homes convey feelings,” the De Cotiises explain, “and the ones we choose to live in are places where we get a feeling of well-being.” Claudia Rose, as someone who loves to be guided by her sense of smell, is captivated by Tuscany, by the scent of rosemary and the smell of the soffritto that invades the streets of Pietrasanta in the afternoon. She is the one who, on her morning walk outside the town, picked the bunches of wildflowers I see in the main living room, elegantly arranged in a few antique Japanese porcelain vases on the DC1921 recycled fibreglass table with a coloured stucco finish. The living room on the piano nobile is the heart of the main apartment, which is laid out according to a logic of conservative intervention.

“Claudia Rose and I have always lived in homes full of history; we like the contrast between old and new, but mainly, we like to relive what has already been experienced because a place imbued with history conveys the possibility of re-interpretation.”

This is best expressed in the sleeping quarters, where the original pastel-coloured plasterwork ceilings have influenced the choice of hues and textures: from the Tuscan marble of the central cube in the bathroom, which conceals a vanity unit and shower, to the artwork by Michail Pirgelis (American Honey, 2017), made from salvaged aeroplane parts, in the bedroom. Vincenzo believes that art must be a focal point: “even though it’s in dialogue with the space, it’s the star and must be allowed to express itself at the right place and at the right time”. 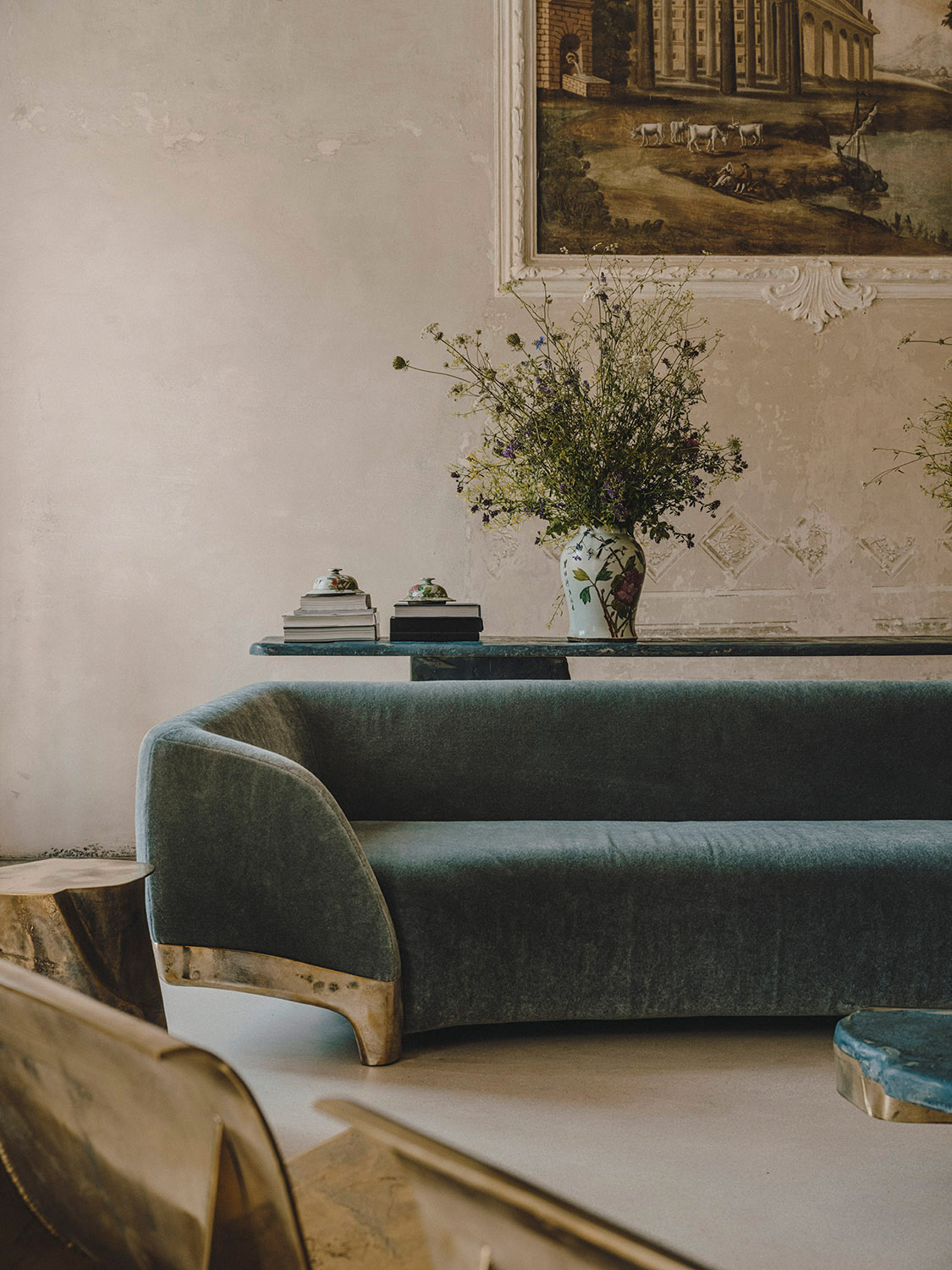 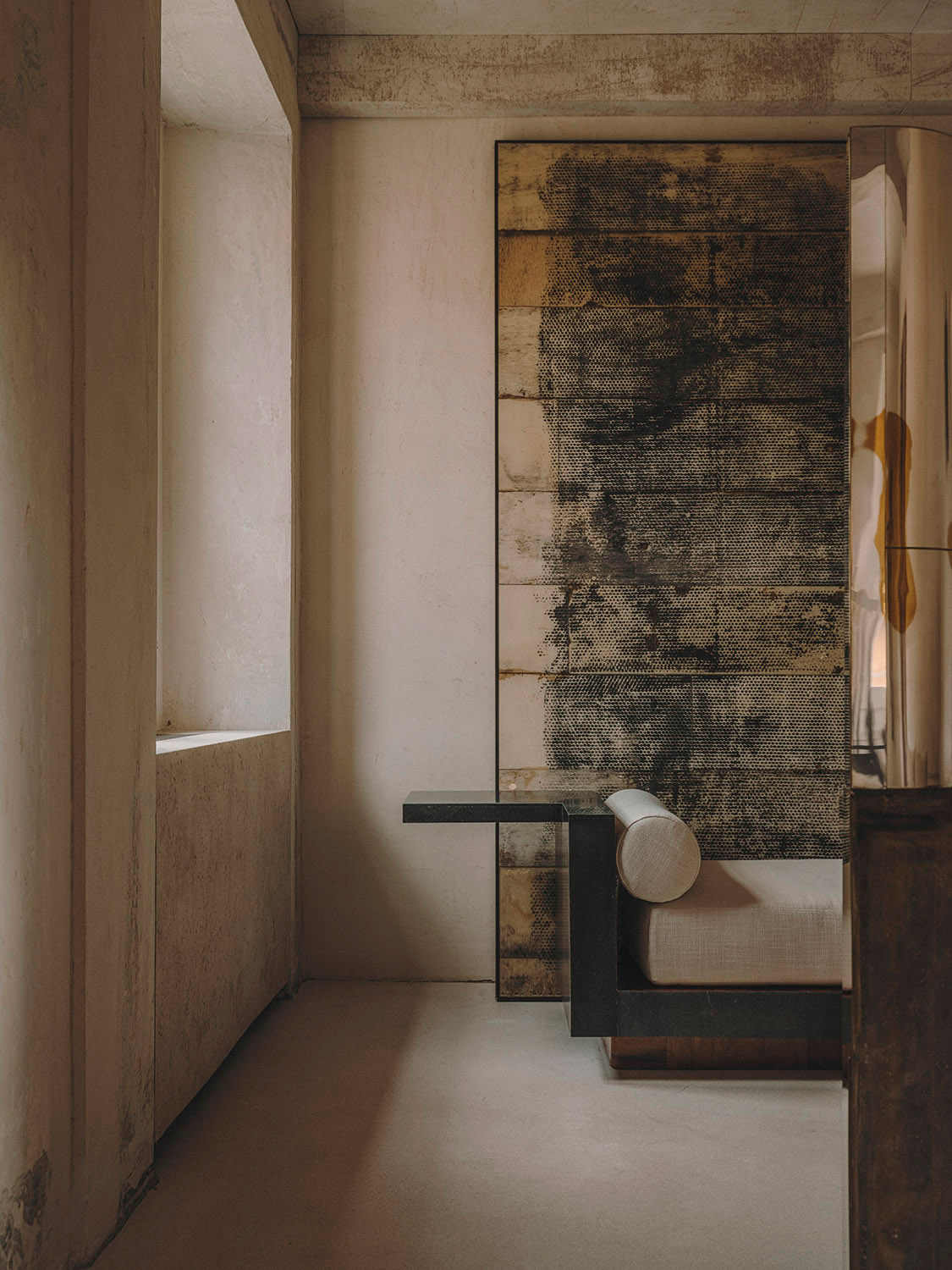 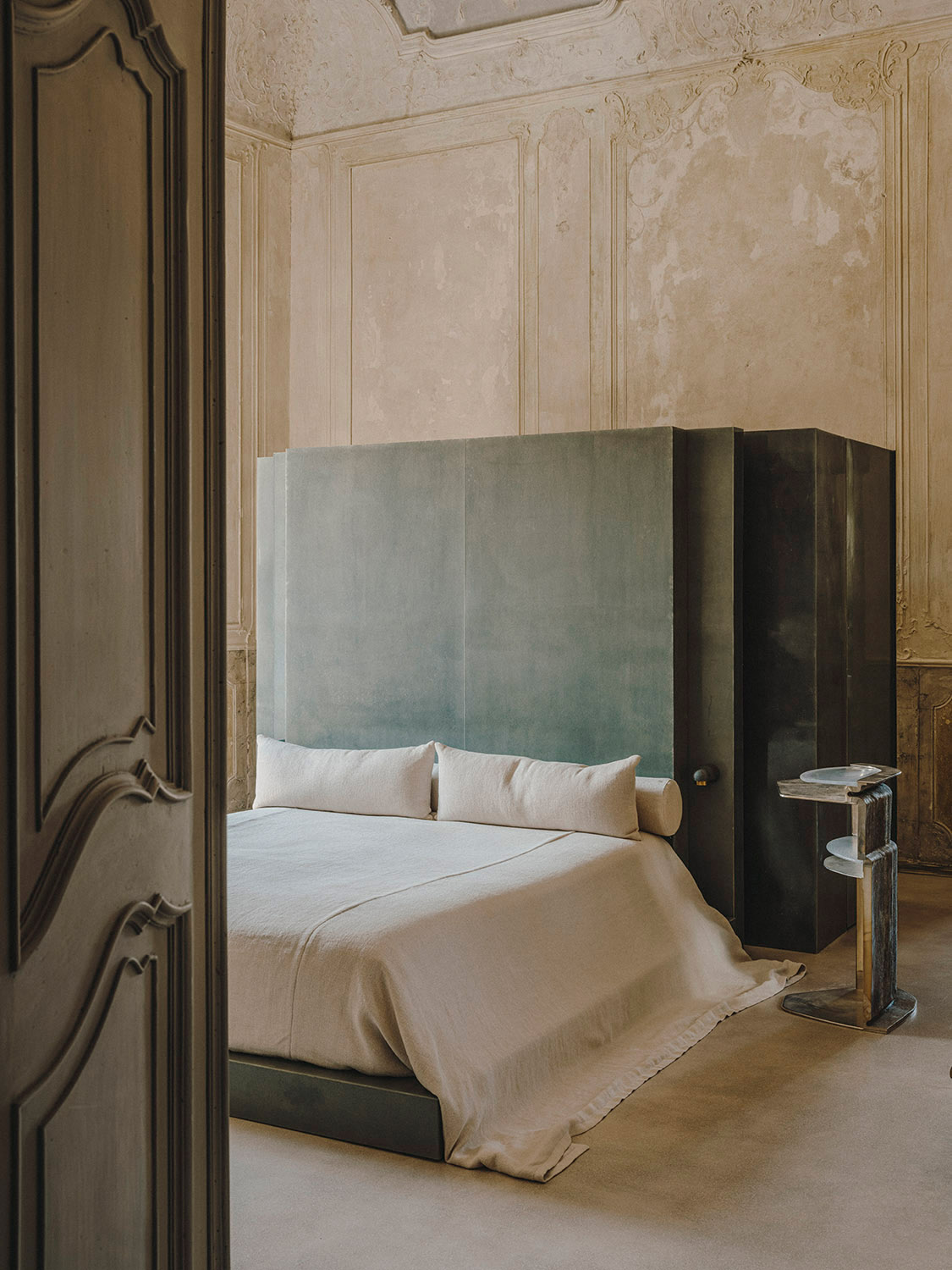 The soft hues of the flowers echo those in the three early-nineteenth-century pastoral frescoes on the walls, off which Vincenzo had stripped the plaster that had been added over time and taken away the original patina of this eighteenth-century residence. The foundations of the building date back to the thirteenth century, when it was erected as a salt store. In the eighteenth century, it became the country house of the painter Antonio Digerini, after whom it is named, and it was donated upon his death to Cardinal Pietro Maffi, who gave it a religious function.

In typical De Cotiis style, the rooms and ceilings have been left distressed, with only the details restored, such as decorative plasterwork done by skilled craftsmen from Lucca to bring the splendour to the building. The most striking feature of this room is its ceiling, which is pierced by an intersection of wooden and plasterboard structures, a site-specific installation (Intersection Pietrasanta, 2019) by the German artist Felix Schramm. “After reconstructing the ceiling, which had fallen in about fifteen years ago, I invited Felix to create an art installation because I wanted to make it true to its spirit. 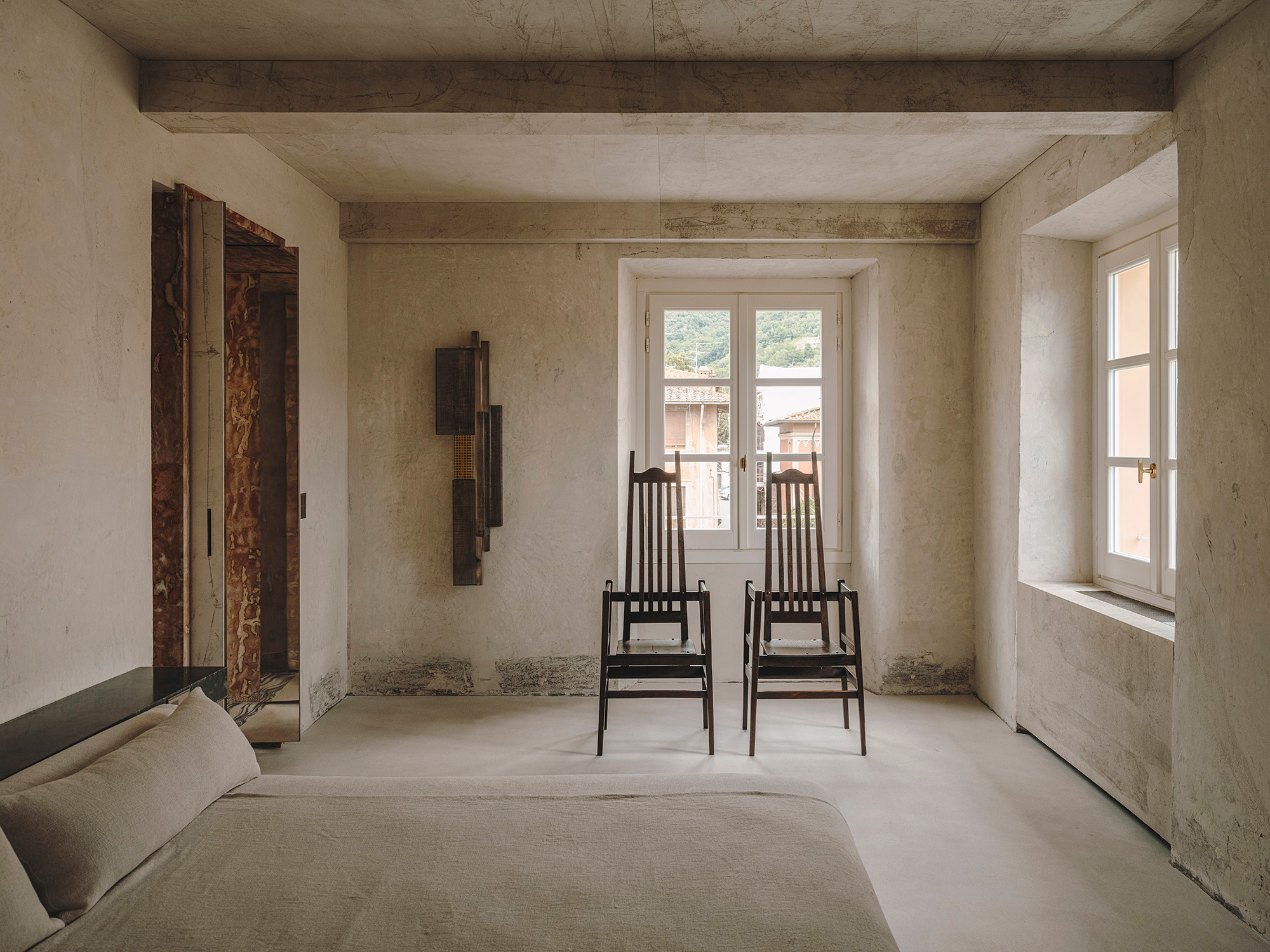 All the contemporary interventions I’ve introduced were made to enhance the eighteenth-century style of the house,” says Vincenzo. “I’m convinced that places have an attitude. Claudia Rose and I have always lived in homes full of history; we like the contrast between old and new, but mainly, we like to relive what has already been experienced because a place imbued with history conveys the possibility of re-interpretation.”

A House of the Simplest Form

Crafted by Andrew Trotter, this modern-day villa was made to blend with the nuances of Puglia’s idyllic landscape and pay homage to the culture that envelopes it.