In residence at Can Lis

The home of Architect Jørn Utzon

More than one house, it is a series  of pavilions and cubes linked by courtyards and verandas. The first is the kitchen and dining, with a larger terrace in front, flanked on either side by two colonnades to shade from the sun, to eat, and to watch the sea. Through a second courtyard we found the large cube living room, with its half circular ceramic covered sofa, perfectly positioned on the east-west axis, to take the sun at any part of the day in the winter from its low four windows; each positioned so that no matter where you sit, you have a view  to the sea. The only other elements in the room were a hole in the wall for a fireplace, and a wall of wooden doors to the courtyard that, when opened, made us feel that the courtyard and the living room were one. 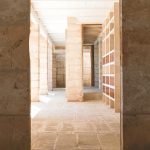 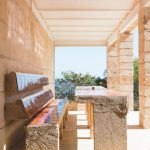 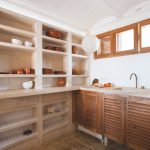 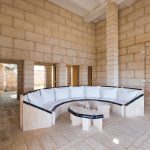 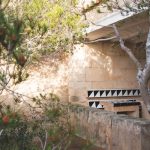 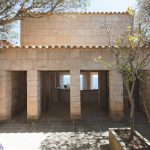 Studying interior design and architecture in Australia, it was a prerequisite that we examined the Sydney Opera House, yet I didn’t delve much deeper into the life and architecture of its creator, Jørn Utzon. It wasn’t until I began to design a house for a friend of mine in Puglia, just over two years ago, and started to investigate local buildings, and the new Mediterranean housing that was linked to the land and to the sea.

During my searches, one building popped up many times. This building was modern, yet had the feeling of a roman bath house, ancient, and set to its cliff top position like it had been there for the last thousand years. The local Tufo in Puglia is very similar to the Marés stone in Mallorca and so, the house interested me greatly. I discovered that the house had its own website and that architects could take residencies there so, with no time to lose, I wrote to the Utzon Foundation.

From the road you see a series of cubes and walls, giving away very little of what is on the other side. Yet opening the door we were welcomed by a picture made from ceramic tiles, a half moon cut out from its centre and the deep blue sea beyond.

Utzon left Australia before the completion of the Opera House in 1966, due to stress and his dissatisfaction with the respect given by the Ministry of Public Works. He and his family passed by Mallorca at the invitation of good friend and architect Erik Christian Sorensen, whose house had no electricity or piped water. They quickly fell in love and bought land on a mountainside but, not having permission to build, they bought another piece of land on top of a cliff, close to the small fishing village of Portopetro. Utzon had been working on designs for a house in Australia that was never built and, with the same ideas in mind, he began to design Can Lis, which he named after his first love: his wife, Lis.

While he didn’t look to the architecture of Mallorca, he did look to the methods of construction, new and old, that the local craftsmen were using. He studied the plot of land, which was only 20 meters wide from the road to the cliff edge. He studied the sun and the direction of the views and the position of the trees, and took symbols from the name of the road: “Calle de la Media luna” – Half Moon street. Utzon believed that a building should belong to its surroundings and be built to feel as though it could only belong in that one spot. 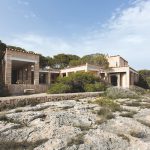 Just before we stayed at the house, i contacted Kim Utzon, the youngest son who grew up at Can lis. He kindly replied, “I will not answer your questions until you have stayed at the house, I want you to experience the house without any influence from me”. With that in mind i left my essay to one side, and we packed our bags and set off to Mallorca.

Arriving at Palma airport we were given a sign. We were greeted by the face of Jørn utzon on the tail of a danish airlines plane, and bright blue skies. we picked up our rental car and followed the detailed instructions for how to find the house. After passing the spring fields of yellow margaritas, running horses, and fat pigs and chickens wandering loose by the roadside, we arrived through the pine trees to a road that hugs the cliff top. We stopped at the wrong house first, confused by the similar house built by Utzon’s daughter Lin and her husband.

The light in the house is magical. Every five minutes it changes, streaming through a window up high, or turning the living room bright red with the sunset.

From the road you see a series of cubes and walls, giving away very little of what is on the other side. Yet opening the door we were welcomed by a picture made from ceramic tiles, a half moon cut out from its centre and the deep blue sea beyond. You expect an architectural gem to be luxurious, or innovative, but when you enter the home that Jørn utzon built for himself and his family, the thing that strikes you the most is how simple and basic everything is.

Two courtyards more and we arrived at our bedrooms. These too had stone beds covered in ceramic tiles set within alcoves, and the larger part of the rooms looking to large windows that only saw the trees and the sea. Another courtyard along and we found one more bedroom with its own bathroom and veranda. This must have been the Utzons’ room. 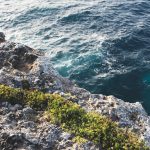 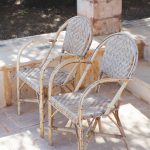 We found a letter from the last residents, giving us tips about things to do, how to enjoy the house, and telling us to enjoy the light, the light, the light. After half a day we realised what they meant. The light in the house is magical. Every five minutes it changes, streaming through a window up high, or turning the living room bright red with the sunset.

We didn’t want to move, the house was perfect. We bought food from the local supermarket, whose owner knew the family well, so that we could stay in the house rather than go out to restaurants. We found a stash of books about utzon and his architecture in one wardrobe and started to read them, but half the time i think we were just sitting there, looking out to sea.

Utzon had been working on designs for a house in Australia that was never built and, with the same ideas in mind, he began to design Can Lis, which he named after his first love: his wife, Lis.

I read that many Mallorcan architects had told him, that he had taught them how to design for their land. all the rooms had large windows with the basic wooden frames sitting outside of the stonework, so from inside you just see a hole, and the view. With the other doors open you could forget there was even glass there, and I have never felt such a connection with my surroundings than I had there. You become one with the land, the sea, and the weather.

Kim Utzon wrote to me shortly after my stay. He told me that the house was originally intended to be bigger but, during the designing, his elder brother and sister left home so the two bedrooms were for only himself and for his parents. The last block was for guests. 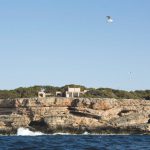 He told me his parents loved to share the house. Family and friends often came to stay and it was this sharing that initiated the Utzon Foundation. as Jørn and lis got older, they found living so close to the sea was humid in the winter, and many architects would take a pilgrimage to seek out Can Lis. So, when they were finally given permission to build on their land in the mountains, they moved to Can Feliz in the mid-nineties, a second retirement as such. Can lis continued to be the family summerhouse however, as Kim explained, it was part of his father’s vision that the house would be used and enjoyed. so if you are an architect and you need a week or two to think about a project, or just to escape and take inspiration, you can write to the Utzon Foundation and take up residence in this magical place.

With the Wind in Your Sails

The sea can be choppy or calm, it can carry you safely home or sweep you straight into the eye of a hurricane.

A New Take On Tradition

When we moved office a few months ago, we decided to revisit the tradition that first set the magazine in motion and welcome both old and new friends to join us in our new space for sharing.

At Openhouse we have a love for quality, that is why we knew we had to work with Jason Gregory, the driving force behind MAKR.